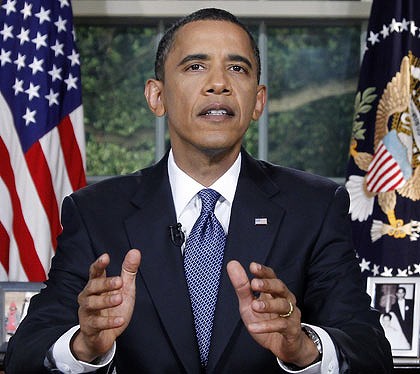 Obama’s speech on the BP Gulf oil spill yesterday combined the best of Obama. He retold the story of the workers who lost their lives in the explosion, he appealed to our reason by making a case for his technocratic administration while acknowledging the limits of our technical abilities, and he painted an evocative picture that appeals to our sense of tradition: that of the “The Blessing of the Fleet.” That story, that every year Gulf fishermen come together to pray whatever the circumstances in which they find themselves, ended on a familiar appeal: that to our American unity and spirit, the one that will help us triumph over this oil spill as we have in the past over all adversity.

The speech is a specific version of a general Obama theme: we will work together to solve this problem because our collective soul is one committed to problem-solving and forward-thinking. Like many hoped in this address, Obama used the opportunity to compel us to shift our dependence away from fossil fuels and use the power of the public sector to fuel innovation in alternative energies.

We cannot consign our children to this future. The tragedy unfolding on our coast is the most painful and powerful reminder yet that the time to embrace a clean energy future is now. Now is the moment for this generation to embark on a national mission to unleash American innovation and seize control of our own destiny.

Obama acknowledged the economic costs that might come with spurring that innovation, but he reminded listeners that the costs of not doing anything are high, though he didn’t point to the Gulf directly in that moment as one of the high costs of dependence on oil. One thing the speech didn’t do, though, is sound new. Obama sounds similar calls often. What hasn’t happened is actual action. He spoke of the climate change bill the House passed last year, but declined to chastise the Senate on its healthcare-bill-like posturing and inaction. That’s probably the biggest source of frustration over the administration’s handling of the oil spill. Contrary to many others, I doubt the dissatisfaction has much to do with the president’s failure to bang a fist on a lectern. I think it’s more that even the best speeches, in the face of a witheringly endless disaster, are starting to sound hollow.