Home » Browse PostBourgie » Not a Good Week for Facebook.

Actually, the criticisms have been building for the last few years, but now it seems that everyone this week is talking about Facebook. The New York Times has created an excellent graphic — as per usual — illustrating all of the steps FB users must take to access and manage their privacy settings (click the pic for more): 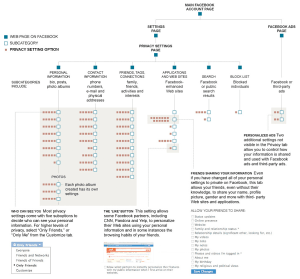 Oddly enough, while Facebook’s privacy policy has grown from 1,000 to 6,000 words, it’s become less and less in the service of the user. The Electronic Frontier Foundation tracks the ‘erosion’ of the policy over the last five years in a timeline.

Today, Ta-Nehisi Coates, who’s waffled on Facebook a bit, finally deleted his profile, citing this as the reason, adding:

It’s quite likely that it’s not possible to go over the edge for good, that they’re keeping this info somewhere even after they tell you they’re deleting your profile. Oh well. Don’t mean I’ve got to stick around.

At the Prospect, there are two takes on leaving Facebook, one from Laura McGann, who’s getting rid of her account:

I don’t want to disconnect. I’m an Internet fan. I cover the future of news for the Nieman Journalism Lab at Harvard, a website trying to figure out how journalism can thrive in the Internet era. I’m not the first Internet optimist to jump ship, either. I’m following in the footsteps of others increasingly critical of Facebook’s weakening privacy policies.

And on the other side, Nisha Chittal interviews Marc Rotenberg, founder of internet privacy advocacy group EPIC that filed a complaint with the FTC over Facebook’s “privacy bait and switch.” With regards to leaving Facebook, Rotenberg says:

There is not much users can do when Facebook keeps changing its policies and the users’ privacy settings. People shouldn’t drop Facebook or boycott. The FTC should enforce fair and transparent business practices. That is an obvious role for government.

I’m not sure what all of this bodes for the company — but the negative exposure may make them change course. And if not, you can always do what my friend Lila is doing: just say “bye bye, Facebook.”