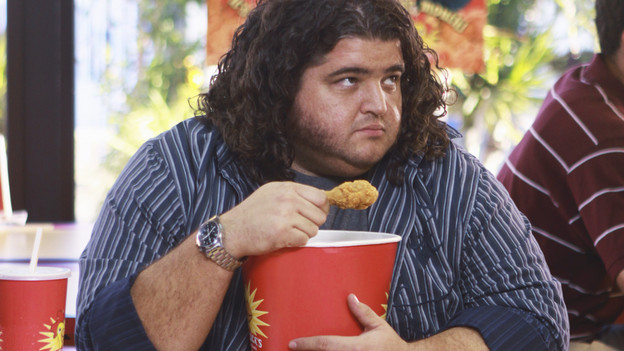 Sorry for the late Lost blogging guys. Got sucked into life, into better TV shows, and, frankly, there’s not a lot to say.

This episode’s sideways-flashes were devoted to Hurley, the one main character we hadn’t really followed yet. In this episode, Lucky Hurley meets Libby, who’s alive and well and living in a mental institution. She remembers him, and when she sees him in one of the Chicken restaurants he owns, she has to say something. Hurley is intrigued, meets up with her later, goes on a date with her, kisses her, and sees the Desmond flashes. He belongs in another life, and now he knows it.

And Desmond knows it too, because he’s going around stalking all of the Losties and convincing them to do the things that will make them realize the alterna-universe they’re in (the way he convinces Hurley to approach Libby.)

On-island, Desmond’s fate is much worse. Evil-Sayid takes him to Not-Locke, who walks him out to the jungle and throws him in a very deep well. (HINT! I bet Widmore’s plan is for Desmond to be Jacob’s replacement. We’ll see if Jacob agrees.) Meanwhile, on-island Hurley convinces Jack to disregard the plan to blow up the plane and try to talk to Not-Locke instead. The dynamite gets Ilana, another tertiary character who now turns out not to matter much. That’s where we leave the island it at the end; Hurley and Jack approaching Not-Locke in the woods, because nearly every single important encounter on Lost happens with people carrying torches coming out of the woods meeting up with people innocently waiting by a camp fire.

Michael makes a brief appearance to tell Hurley about this meeting up with Not-Locke plan, and one of the island’s mysteries is solved. He tells Hurley he’s stuck, dead, on the island because of what he did. The ghosts of bad island deeds past are the source of the whispery voices we first heard when Sayid met Rousseau in Season 1, which was one of the spookiest moments I’ve ever seen on network television. What Michael says makes sense. It’s a perfectly explanation for the voices we hear. But it also sounds an awful lot like purgatory, and the producers’ refusal to call the island purgatory just feels like stubborness.

It’s also a big source of what makes me so angry about the show now. Someone at work asked today: “Did we ever find out what was up with the polar bears?” No. No we didn’t. Nor did we find out why Walt was special. And no, we never will. Even if we did find out the source of these mysteries, their explanations would likely be disappointing. The series feels so disjointed that the show we’re watching now is an entirely different one from the one we started watching. So I don’t care much about what happens in it. I want to know what happened in that older show.

Anyway, the Jack, Hurley and Not-Locke meeting wasn’t the last scene of the show. That belonged to a parallel universe Desmond running over Locke in the parking lot. Clearly, Desmond’s seen what Locke really is, and it’s a move I’m pretty happy about. Let’s see if they drop this thread, or try to resolve it.