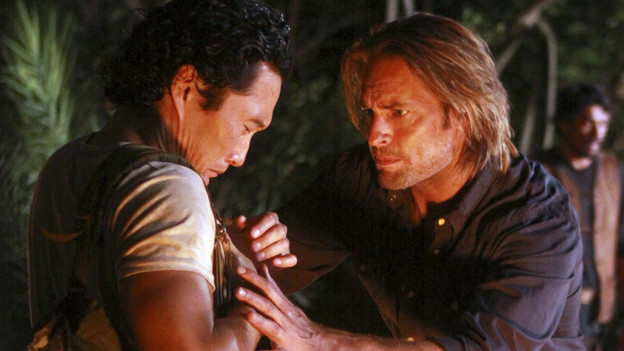 In this Jin-centric episode we finally got back a bit to that old feeling Lost used to engender: suspense, intrigue and delightful confusion. We finally get to see Widmore back on the island, making some sort of move. We have people getting shot at by marauders in the dark, weird rooms from the Dharma initiative and a submarine.  There were a couple of twists at the end I’m genuinely excited for the next episode to resolve. Incidentally, that’s how I got hooked on Lost in the middle of the second season, watching episode after episode on iTunes because I couldn’t wait to find out what happened. This return of something like a compelling narrative reminds me a bit of the third season, when the first half dragged on and on, broken by a weird break in the middle of the year, only to finally pick up in the last eight episodes. Remember how long it took Mr. Eko to die?

But back to Jin, who’s as handsome as ever, and sort of share’s the spotlight with Sun in this episode. In the sidways-flash, we’re reminded that Jin’s money was confiscated in the airport,* and we can safely assume he was up to no good, because we know what Jin does for Sun’s father. Or do we? Since this is alterna-word, it turns at that Jin and Sun aren’t married but, since some things are eternal, sigh, they’re in love and having an affair. But more on that later. Jin and Sun leave the airport sans cash, and head to the hotel. We first find out they’re not married when Sun uses her maiden name at the hotel and Jin asks for the second room.

Back on the island, Jin decides he’s leaving before Smokey-Locke gets back from a little jaunt to see Sun, though Jin doesn’t know that’s where he’s going. But before he can get away, people with guns shoot all the Locke folks, not in the bellies!, but with tranquilizers. Jin is taken. We next see him in that re-education room that Alex’s boyfriend was in during his third-season teenager hi-jinx, and the creepy brunette comes back to ask him about these maps he signed when he was working for the Dharma initiative in the 70s. The island’s mysterious geophysical properties are back in play. But this reminds me, where was Widmore in the 70s? The Losties worked with Dharma when Ben was a kid, so way before he kicked Widmore off. Ben once mentioned that Widmore had broken some rules by going on and off the island, but was he gone for three whole years with nary a mention? Where was he during that entire time, fathering Daniel?

Meanwhile, Sun is playing around in her old garden, where everything is dead. Symbolism! Remember when she planted that in the first season, and Jack came across her and said, “Smart!” As if to remind us to remember, sixth-season Jack comes up to her again and said, “Remember when you planted this? Feels like a 100 years ago.” A 100 years, and 1,000 dangling plotlines. The show does this periodically, especially through Hurley: Reminds us when we used to like the show. Anyway, this is when Locke confronts her and chases her until she bumps her head and forgets English.

Back in Locke-land, Locke tells Claire she can basically kill Kate later, and Locke tries to find Jin. He finds Widmore instead, and says, “A wise man once said. . .” No good line ever follows a mundane statement like that. And it didn’t. Locke tells Widmore a war is coming. But it doesn’t feel like a war. If feels very much like a manufactured climax to a dull season. On the other team, Richard proves Ilana right by coming back. Richard tells everyone they have to destroy the plane. And Sun, of course, rants at them all in Korean, because she doesn’t want to destroy the plane but instead needs to use it to get off the island with her husband and go back to their daughter. She is the only sane person.

In sidways-flash America, the parachute dude Sayid shot a few episodes ago sneaks into the hotel room where Sun and Jin are talking about sneaking away. He wants the money, and brings in Mikhail from the satellite/cow Dharma spot to translate. They tell him about the airport, and Sun offers to go get money. Jin makes them promise not to tell Sun’s father about their relationship, but the bad guys already know. It’s all a ruse! They take Jin to the restaurant, where we learn the money was payment to kill Jin. Sun’s father made Jin a courier for payment for his own assassination! Sun also finds her bank account closed. Mikhail takes her to the restaurant, and Jin ultimately shoots him, but not before a gun fight during which Sun is shot. She tells Jin, who’s carrying her, presumably to a hospital, that she’s pregnant.

Back on the island, Jack finds Sun upset and staring into the ocean, and brings her a tomato he found that refused to die. Symbolism! He promises to help her find Jin, and they hold hands while weepy music plays. Widmore is on the sub, telling Jin that there’s a secret person who can help them keep Locke on the island. It’s Desmond, who Sneaky-Scary-Sayid sees overly-drugged on the roof of the sub right at the end. Hard not to feel that this is Widmore getting back at Desmond in some way.

I’m happy to see Desmond again, but it all brings up one big problem I have with this parallel world scenario. There were so many people integral to the plot in the first two seasons who are no longer on the show. That’s fine. The show’s story dictated that certain people would have to die. They’re on a scary, weird island with dangerous people and monsters. But now, in the parallel world, none of them did die. We know Shannon probably wasn’t on the plane. But what happened to Michael? I guess they can try to say that in the alternate universe, Michael didn’t get on the plane either, but that’s a cheap trick. What happened to Ana Lucia, and Libby, and Mr. Eko? You can’t just reintroduce the things you want to, leave out those that would make the story inconvenient, and still make it make sense.

*Sidenote: do we all really believe that there’s no Korean interpreter at the customs office in LAX?