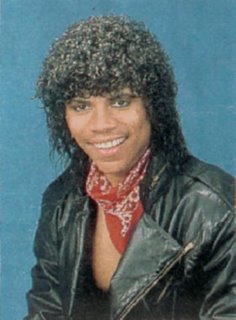 Stonewall “Stoney” Jackson was born in Richmond, VA, in 1960.  A natural on the stage, he toured Europe with the Young Shakespeareans, a highly prestigious acting troupe that admits only 5 new members worldwide every 5 years.  Stoney gained notoriety overseas as the Moor Othello by the time he was 8 years old, and to those who know, is considered one of the greatest black acting talents of all time.

His career took a turn for the worse, however, when, upon returning to the United States, he made a bold move and got a Jheri Curl, a popular hairstyle of the 80/s.  Despite his illustrious career, the glistening, oily strands atop his head made it impossible for the populace to take him seriously.  In 1990, after completing his run as Travis on the popular sitcom “227,” Jackson founded N.A.A.J.C (National Association for the Advancement of Jheri Curls) in hopes of obtaining equal rights for those with the hairstyle.  His career never recovered and he has been acting in straight-to-video movies, such as 4-Bidden and The Thief and the Stripper ever since.