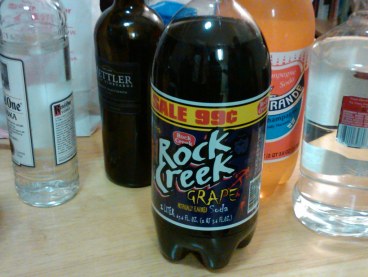 You ever have one of those dreams wherein you’re taking your pet polar bear for his evening walk, strolling  past  random people you sort of know while Chubb Rock stands on the corner politely asking passersby if they can spare some Lemonhead money? And then you wake up and realize it’s because you left your tv on?  That’s what last weekend was  like, but in real life.

On Saturday, Alyssa Rosenberg and Shani headed to a Howard football game to watch the Bison get murked. (But Alyssa was really feeling the band.) Later that night, a motley contingent that included myself, quadmoniker,  Spencer Ackerman, Matt Yglesias, Shani, belleisa, Mark Goldberg and Rhome Anderson repaired back to Alyssa Rosenberg’s apartment after a planned bar outing was thwarted when Jamelle’s I.D. failed to meet the completely arbitrary guidelines set forth by the District of Columbia. (His Virginia I.D. is vertical, and D.C. bars were recently prohibited from honoring them because they’re easy to fake or some such bullshit.)

But lo! Fun was had! Tweets were hastily tossed out into cyberspace. The rest of the folks arriving for the Cold Drank Summit were advised to meet us. Dayo Olopade rolled through, as did Dave Weigel and Ezra Klein. Ann Friedman, Phoebe Connelly and Alex Gutierrez dropped by. (Shani to the six-foot-four-ish Ann: “You tweet like a much shorter person.”) Gautham Nagesh and l bonded over our love for 90’s hip-hop, while Anna John professed her love for Rasheed Wallace. The next morning, I woke up and ran five miles on the city’s edge with Adam Serwer. Just two bloggers who jog, yo. Or…joggers who blog. (Yo, wtf? Does that not sound like some free associative REM sleep shit?)

All the thanks to this goes to Alyssa, who made the bold decision to throw this bloggy get-together, and the no-less audacious decision to down a beverage comprised of grape drink and vodka. (Ain’t no vitamins in that shit.) Seriously, not a bad way to spend a weekend.