It took 12 years, but here we go again! Ridiculous Moments in R & B, part deux! In no particular order, the winners are:

1. Who let your drunk uncles in the studio?? I have no idea how ‘Float On’ by the Floaters came about, but I’m guessing it went something like this:

Larry: Ay! Ay y’all, this where my nephew Ronnie J come in here and do his music shit at…I think he got some beer in a fridge here somewhere down here since Paul done drank up all the everythang.

Paul: You cain’t put that on me, man! You know I don’t drink no beer if it ain’t malted anyway, you hear me??! *pimp runs around the room*

Ralph: Shut up, fool! Hey Larry, what you say Ronnie ‘nem do in here? Music? Aw, shit, we could do that! We can make somethin’ for the ladies, man!

Charles: AIN’T NO MAD DOG OR NOTHIN IN HERE, MAN!

Larry: Yeah! Say, man, that ain’t a bad idea! There’s this redbone that work at the Snackin’ Shack I been tryin’ to get at for the longest!

Ralph: Awwww yeah! I’ma get on that microphone, talkin’ bout some “I’M A SCORPIO! DO YOU KNOW WHAT THAT MEAN, GIRL??!” *inappropriate hip gyration*

Charles: THIS SOME BULLSHIT!!!

Gotta hand it to ’em though. The foot action is *crazy* and this song is better than ANYTHING that Trey Songz will ever do in the history of his life.

2. Boyz II Men doesn’t mind STDs all that much. Boyz II Men, I’d argue, is one of the most successful musical acts ever, and definitely one of my favorite. I’m sure ‘End of the Road’ still holds all kind of record-breaking chart performances and whatnot. What was awesome about Boyz II Men is that they were hip, they were new and fresh and they made good definitive 90s R&B, but they still retained a classic R&B feel. I think we can find that classic influence best in the spoken breakdowns they put in their songs. My favorite, by far, is the one in ‘End of the Road’ because it’s just so inappropriate. I understand bein’ so in love that you can’t function or see straight or none of that. But really, there comes a point where you really should try to, because this:

All those times of night when you just hurt me
And just ran out with that other fella
Baby, I knew about it, I just didn’t care

I read that and I hear: “I know that this is no longer a monogamous relationship, and I know that monogamy is an important thing to have when trying not to get the clap, AIDS, and other STDs, and I know that by willingly continue to take anything you give me, including your now soiled vagina, I am putting myself at risk, but I just don’t care.” He then goes on to say that he’ll be there for her until his dying day. Well with that attitude, that day may be closer than you think, buster! Invest in some standards!

3. Jimmy Cozier has self-esteem problems. Speaking of low standards, remember Jimmy Cozier???? He actually made some pretty good music for the 2 weeks he was relevant! The song he did with Alicia Keys was my jam for a good 3 days. His big song (I think?) was ‘She’s All I Got,’ the one that went  ‘sometimes I looove heeeeer/sometimes I love her noooooot/I ain’t lettin’ her gooooo/cause she’s all I goooooot.’ Now on the surface, I thought this was sweet: he loves her so much that even though they have problems, he feels that she’s the only constant in his world, the only thing he can bank on to be there for him because they’re such a perfect fit. How poetic!

But upon closer inspection…I think it’s more accurate to say ‘this bitch is crazy and he doesn’t think he can do any better.’ I mean hell, in the first verse he’s singin’ about how she just blacks out sometimes? WTF? She likes startin’ shit just to see how far she can go before HE flips out?? Um, that’s not cute. That’s unhealthy. Come on, Jimmy. You weren’t that bad lookin’, boo. I believe in you.

4. Quincy Jones is a delight! Literally! If Wikipedia is to be believed, Quincy Jones’ middle name is ‘Delight.’

Quincy Delight Motherfuckin’ Jones. Junior. He’s a junior, so that means there is another Quincy Delight Jones out there in history. Ridiculous. 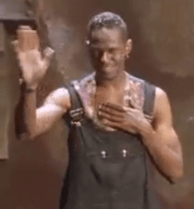 Hi! I'm Brian McKnight, and I will regret this fashion decision in 10 years!

5. Who knew Brian McKnight was so 90s??! Okay, I forget how and when I stumbled across this song and video, but it definitely wasn’t long ago. I think I caught it on VH1-Soul during old school hour or something. I NEVER knew this song existed!! It’s GREAT! If I had known this song existed when we did the ridiculous moments in new jack swing post, it TOTALLY would have been on there. This is like, the apex of 90s R&B videos. It has it all. Let’s examine, shall we?

1. Shadowy girl in spandex dancing against a white background? Check.

2. Randomly hanging out in an alley for no apparent reason? Check.

3. Huge shadow of an industrial fan in said alley, also for no apparent reason? Check. <– why did they do that so much??!

5. Ridiculous fashion? HOLY MOTHER OF CHECK. This is the real reason that I decided to put this on the list. When you’re watching the vid, skip to the 1:16 mark. What do you see? Your eyes are not deceiving you. That is Brian McKnight wearing a motherfucking vest under a motherfucking pair of overalls with no motherfucking shirt beneath either of them.

6. Is it still stalking if she never sees you? …yes, creepy-ass Lionel Richie, it is. The video for his song ‘Hello’ has ALWAYS weirded me out. I think that’s partially because Lionel Richie himself just kinda makes me feel weird. Imagine being out in the wild and you see a ferocious lion…who just happens to have a Jheri curl. You’d be confused, right? You wouldn’t know whether to be afraid and run for your life, or walk up to it and try to show it a better way of doing things. That’s what Lionel Richie looks like to me. Very talented guy but… something is always just a little off.

Watching him stalk a blind student of his in this video didn’t help settle any of that for me. I mean first of all, even if you weren’t a creepy stalker, she’s still your student which is, at the very least, hella immoral.  But considering that you ARE a creepy stalker and are in ALL this girl’s classes watching her dance and shit, rubbin’ on walls while she pirouettes…inappropriate, Lionel. Very much so.

She was a pretty talented sculptor though; she captured his juicy lion-ness perfectly.

7. Holy Cameo’s codpiece, Batman! I… I actually don’t know what to say about this. Larry Blackmon of Cameo wore a codpiece. In the 1980s. A time when nobody had any business wearing a codpiece. Why? Why did that happen? Do you think he still has it on now? It’s very unsettling and über distracting. to illustrate how distracting that sumbitch is, I will tell you that I’m so turned off by the codpiece that I don’t even have any ill will toward the Steve Harvey/Kid from Kid n’ Play hybrid lacefront hair piece on his head. That’s pretty major.

There is some good to come of the codpiece, though (…pardon the pun?). It’s an insult factory! Somebody snappin’ on you and you need a comeback? Consult the great codpiece of Cameo. Walk into a dirty room and need a way to let people know how you feel about the state of affairs? ‘Ugh, it smells like Cameo’s codpiece in here!!’ Ladies, being pursued by someone who repulses you? ‘Ugh, I’d rather lick the inside of Cameo’s codpiece!’ Somebody being generally foolish and u need to let them know it? ‘Ugh, you oughta be smacked in the face with Cameo’s codpiece!!’ And so on and so forth. You can use those. I give you permission. (But if they somehow make you famous, IM COMIN AFTER YOU FOR MY SHARE OF THE MONEY!)

8. Tank could have some personality disorders. And possibly ‘roid rage. Aaaah, Tank. I LOVE me some Tank. Not too terrible on the eyes. Got the nice ex-stripper body goin’ on. I’m guessing his biggest song, and definitely one of my favorites (to be all the way real, I think I only know two of his songs), is ‘maybe I deserve.’ I love this song because the concept is creative, he’s got a nice voice, and he randomly snaps as he’s singing. Like I really think he was in the studio havin’ some post-traumatic flashbacks and slips up and lets the anger go a couple of times. The first time is around the 1:51 mark when he asks her WHO THE HELL YOU TRYNA IMPRESS? (LOL). Oh, and then there’s the part where he tries to choke her out not long after.

It’s okay though! After that he leaves the manic stage and admits that it’s all his fault! He’s insecure! But then she admits cheating on him and suspiciously, that’s where the story ends! WHERE IS SHE, TANK??! WHAT’D YOU DO WITH THE GIRL, HUH??!

Also, remember the song ‘Slowly?’ OMG. This is my favorite Tank song, and one of the songs that I’d like to conceive my first child to. in this song, that whole aggressive I-could-snap-your-neck-if-I-wanted-to thing really works in his favor, cause u know he’s not gonna snap it this time, just grip it gently. Maybe run his thumb across it while he does. ….*ahem* so! I’m video surfin’ on YouTube one day, and I realized id never seen the video, so I look it up expecting something super, super sexy to match the super sexy song and what I got instead was 8 minutes of shit that don’t go together at all. I won’t go into detail; I’ll just let you see for yourself. I will say that I blame R. Kelly for this video format, though.

9. Oh shit, David Ruffin is back from the dead? And making reggae music?! You know, I have trouble separating the great Leon from the characters he portrays. My favorite, by far: well, it’s a toss up between Little Richard in the Little Richard Story and David Ruffin in the Temptations movie. I usually call him David Ruffin though, and that up there in the bold print is what I said when I ran across this: Leon got a group!

LOL don’t they look like a broke down Arrested Development?

I tried to listen to the music seriously, but every time Leon finishes a verse I see him doing the David Ruffin spin and I just can’t take any of it seriously.

10. That’s just… nasty. Okay. I listen to some ignorant ass music. I listen to some stuff that stands in explicit contrast to my actual factual personal convictions and beliefs. Misogynist, violent, homophobic, unabashedly whorish. But it’s art, right? I think it’s possible to enjoy things that are out of your personal character for art’s sake.

Sons of Funk’s ‘Pushin’ Inside of You’ is pushin’ my limits though. I mean..lol. There’s sexiness in being direct, but just spelling it out like that? You have to sing a song about how you’re pushin’ inside of me? Someone didn’t learn the fine art of being coy. I mean why stop there? Let’s just use the clinical terms if we’re gonna spell it out! ‘Female, I enjoy/the sensation that I experience/when my penis is inside your vaginal waaaaalls/I am in favor of/the various sounds you emit/as I engage in coitus with yooooou.’ Might as well!!