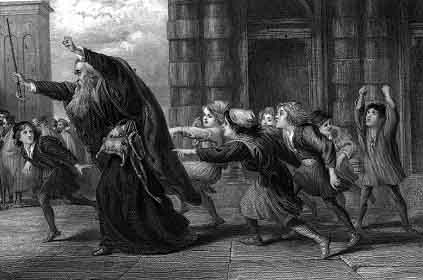 There is a saying that the Jews who are wealthy got that way not by watching dollars, but instead by taking care of the pennies and the dollars taking care of themselves. By not using earmarks to fund projects for South Carolina and instead using actual bills, DeMint is watching our nation’s pennies and trying to preserve our country’s wealth and our economy’s viability to give all an opportunity to succeed.

To which one of Goldberg’s readers responded:

Perhaps I’m seeing something that isn’t there, but I inferred from the title of this post a suggestion of anti-Semitic bigotry on the part of the two county Republican chairmen.

First, I think there is a difference between stereotypes to be disparaged and stereotypes to be emulated. The chairmen were guilty of the latter. Second, I’ve lived 2/3 of my life in the South/Southwest and the rest in the Northeast. I’ve the noticed that the attitudes about Jews in either place to be remarkably different. In New York, a Jew is some jerk who is dating his sister or a weirdly dressed guy who’s probably hoarding diamonds. In the S/SW and probably in most of the Midwest, a Jew is David or Solomon or Daniel or Jesus or James or Paul.

Ah, yes! Those good stereotypes that we should emulate! They’re always tossed into the bin of “bad” and “racist,” which just isn’t right. Unlike “bad stereotypes,” the good ones are dehumanizing and condescending, but in a well-intentioned sort of way!

The stereotype of the money-hungry Jew has had a pretty good run (Shakespeare!), as stereotypes tend to, what with their being logical fallacies that can’t be disproven. This one really picked up traction in the olden days, back when Europe’s Christians believed that money-lending was a sin. Europe’s Jews were relegated to the bottom of the social ladder because they didn’t believe in salvation through Christ. They were blamed for everything from witchcraft to killing Christian babies to spreading the Black Death, and massacred in violent pogroms. (This suggests that stereotypes are so long-lived because the dangerous stupidity of racists has no apparent ceiling.) Since they were barred from other kinds of labor and had no religious compunctions against it, many Jewish men ended up taking work as money-lenders — which being sinful and all, was held up by Europe’s Christians as another example of Jewish iniquity and duplicity.

(This is textbook racism:  a complicated feedback loop of dehumanization used to justify cruelty toward a given group. Por ejemplo: “Blacks are dumb and lazy! We better own, beat, terrorize and rape them, keep them from reading and codify their inferiority into law! By the way, did you know that those Negroes can’t read or advocate for their own humanity? Idiots.”)

Hitler rose to power in part on the idea that there was a secret cabal of shady Jewish bankers wreaking pecuniary havoc on the wider world — a notion that Germans were primed to receive after centuries of European folklore posited the wickedness of Jews as a given. That idea remains a tentpole of global antisemitism.

In trying to flip the script, those two S.C. Republicans miss the point that their “compliment” starts from a position that the money-hungry, penny-pinching Jew stereotype is true and valid.Trying to untether that stereotype from this history, as the guy defending these two Republicans does, takes a lot of arrogance, ignorance  or both.

If you scratch down just below the surface, you’ll find this kind of Othering in all “good stereotypes.” The well-worn trope about black men being strong and athletic with huge dicks is supposed to be some kind of compliment, even as it directly recalls the myth of violent, animalistic black male sexuality to which so much of America’s long history of racist terrorism has been a response. The “positive stereotype” of the smart Asian is based on the old idea of Asian folks as crafty, untrustworthy possessors of secret knowledge — an idea whose assumed validity makes it easier to round folks up en masse during wartime and shove them into detention camps.

But those two South Carolinians and their defender at Goldblog weren’t trying to conjure up all that historical ugliness. They’re just some down-home guys, regular schmoes who can’t be bogged down with all that reading and the assumption of basic human dignity of folks who aren’t like them. I mean that in a good way, of course.