Commenting on the News. 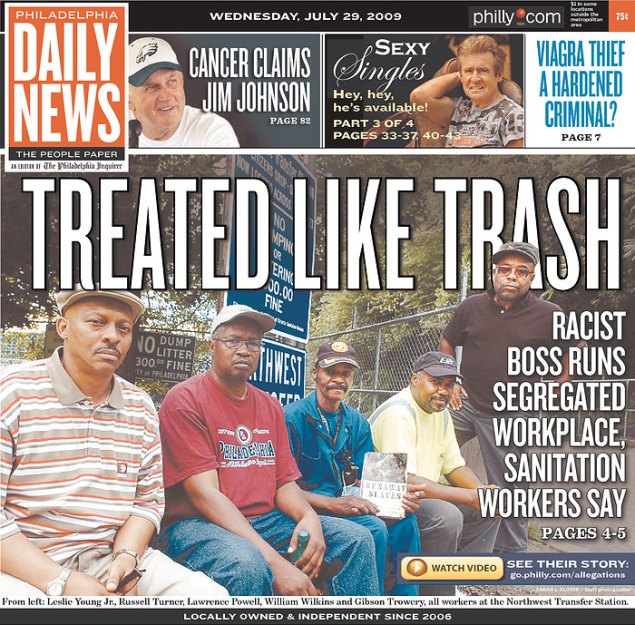 Have you seen this story? It’s an lengthy piece by Gloria Campisi for the Philadelphia Daily News about a group of black workers at a city trash facility who are suing over racially segregated bathroom and water facilities. And apparently, these workers have been filing complaints about racism since 1999, with no investigations or follow-ups from the city.

Lawrence “Lonnie” Powell, 58, a semiskilled laborer at the city’s Northwest Transfer Station, in Roxborough, said that since he began working at the trash-handling plant in 2003 he has had to seek the superintendent’s permission to go to the bathroom — then descend five flights of stairs to use it.

Powell, who is black, said that white employees have been permitted to use a bathroom just 25 feet from his work station.

“On several occasions I’ve actually defecated on myself, trying to get down to the bathroom,” said Powell, who operates a machine that packs trash into tractor-trailers to be taken to landfills.

Among those allegations is that for several years Gill has kept a “supervisor’s bathroom,” one flight up from Gill’s office, that “only the white employees were allowed to use…whether or not they were supervisors,” Powell wrote in an affidavit last month.

“Quite often, while I’m up there, I could be sitting in my booth, and I see white guys going into the bathroom,” Powell said in an interview. “They walk right by the door and go right in the bathroom there. That’s maybe 25 feet away from where I’m at.”

But when he has to go to the bathroom, he said, he has to go down to Gill’s office to get permission, then descend five more flights.

Two other black workers, Gibson Trowery, 55, and Leslie Young Jr., 51, filed a complaint with the Pennsylvania Human Relations Commission in October 2007 and a lawsuit in January alleging discrimination by the city and infliction of extreme emotional distress by Gill.

Howard K. Trubman, a Center City attorney representing the black workers at the station, said that the law permits Trowery and Young to take their case to court because the PHRC did not rule within a year.

But black workers had complained in writing about what they considered racism at the station as far back as 1999, Young and Trubman said.

In August 2007, Powell aired the black employees’ grievances in a meeting with Gill and Streets Department Deputy Commissioner Carlton Williams, who then ordered Gill to open the supervisor’s bathroom to everyone, court documents show.

That meeting came three days after a job action on Aug. 17, 2007, in which no African-American employees at the station reported for work. The workers still refer to the protest as “Black Friday.”

Powell said that he later saw a black employee, who had been promoted to a supervisory position, using the “supervisor’s bathroom” several times.

But that didn’t last, and that employee went back to driving a truck, Trubman said.

Reading the comments on stories like this is often an exercise in patience. News stories about race, women’s rights, homosexuality, and Obama seem to attract bigots like flies.

When I read the piece this morning, there were 27 comments on it. Two had been removed, presumably by the editors. As I scrolled down, there were comments like “these men should be ashamed of themselves for bringing frivolous lawsuits against hard-working, upstanding men like Mr. Gill” (paging 1954!). And, “That guy should get Depends, they make them for both whites and blacks.” And, “I don’t know who’s worse, Campisi for writing this story, or the Daily News for putting it on the front page!” And, “Why do blacks want to be babysat??” These are, of course, paraphrased by yours truly, because while the comment section was closed by the time I got there, it has now been completely deleted.

G.D. tells me that the Philadelphia Daily News is right-leaning, like most metropolitan tabloids (think New York Post, or the cover of today’s Trentonian), so I’m not surprised by the vitriol in the comments about a story about blacks taking action against racism. But I am surprised by the decision to not allow the comments to be viewable, if not remain open.

Did the outright racism in the comments section make the editors uncomfortable?