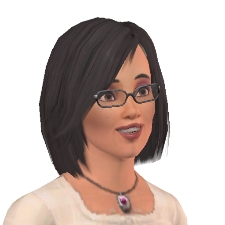 I’ve never spent much time considering my addiction to The Sims, which I started playing in the summer of 2004, after I read an essay in Chuck Klosterman’s book, “Sex, Drugs, and Cocoa Puffs.” I’d never heard of it before, but since the company that made it — Maxis, which was later bought by Electronic Arts — was ready to launch The Sims 2 they were selling all of the first Sims and its expansion packs really cheaply. I bought it. A long, sleepless night later, in which I forgot to eat and barely noticed the passage of time, I realized I’d been hooked.

I think it’s party because the game is what I used to do as a kid anyway. I grew up in a really small town and was kind of a loner kid, so imaging a big fun neighborhood with pretty houses, kids who played together, and people who  had careers, got married and had babies in an orderly fashion was a great pastime. That’s really what we all were always doing when we played with dolls, imaging a neat little life.

So my mom got me The Sims 2 the following year for Christmas, and I bought all of its expansions and played it until last week, when The Sims 3, a belated Christmas gift, came via UPS. I immediately made the Sim version of myself I always try to make, but the new game’s customizable features made Sim Quadmoniker uncannily close to the real thing. (In the Sims 2 Sim Quad was long dead, as were most of her four children. I think I was at the great-grandchildren level.)

Unfortunately, in the beginning I made Sim Quadmoniker with too many of my “bad” traits. I did this because, since they’re really my traits, I didn’t totally realize they were bad. I made her a perfectionist, but rather than make her an exacting worker it just enabled her to criticize other people about their dirty dishes or their imperfect lawns.

The Sims 2 was a quantum leap up from the Sims 1. Sims aged, had babies with features somewhat related to genetics, and died. I was expecting a similar revolution with The Sims 3. Electronic Arts, expecting that I was expecting it, tried to provide it in the form of a seamless town in which all Sims would age together. That is, while in past games each lot was a discrete mini-game and the things you did to one family pretty much only mattered to that family, in this game other Sim families would continue to grow old, make friends, get married, have babies, get promoted, and eventually die, whether you were watching them or not.

Or, that was how it was supposed to go. In the hours I played the game, only one couple got married on their own. All of the Sims, somehow, had babies in the elder years, and those babies didn’t really have parents. I’m sure the game wants you to believe they’re adopted, but why are all these old Sims randomly adopting babies a few Sim days before they die? I mean, in real life — or as the Simmers who talk about these things say, IRL — I’m all for adoption. But it doesn’t make sense, from a story-telling perspective, for it to be everyone’s thing.

But the worst part is that Sims, randomly and without warning, move out of town. That sounds like the kind of thing people might do IRL. What it actually means for the game, though, is that your family is deleted. Deleted forever, without you having a say in whether that family should go or not. For Sim Quad, that meant that after hours and hours — from her perspective, years and years — of working to become Leader of the Free World, of amassing a good amount of money for her own bank account, of breaking up another marriage so she could land one of the town’s richest founding members, and of slaving through the unexpected birth of triplets and three other kids, suddenly disappeared when I turned my back to move her eldest daughter into a new home. I didn’t know it would happen. And there was nothing that I could do.

I’m not going to tell you I’m attached to Sim characters. That would be weird. And sad. But there’s an aspect of the game that feels like effort, which has always been the weirdest part, and all that effort was gone. More-importantly, this isn’t “story-telling” at all. Without her family, the eldest daughter (and her stepbrother, also stranded in town) didn’t make sense. She still had a relationship to them, but she couldn’t hang out with them or talk to them on the phone. They weren’t going to age with her. Suddenly, she hadn’t come from anywhere, and had no connections. I lost interest in playing her, deleted the town, and started again. But now, with my new town, friends still keep moving out. I tried to build a work-around for it, but it didn’t fly. I’m afraid to turn my back on Sim Quad again. And I have no faith in the narrative structure of the game. I won’t be able to go for generations and generations and imbue my neighborhood with its own little history, like I did in the past. It’s a town that’s much less certain and predictable, and it was always the predictability of the Sims that led to its appeal. You may never get a job you like or find love IRL, but in The Sims, all you have to do to get a promotion is earn the right skill points, and all you have to do to get married is tell jokes until the other person likes you back enough.

The feature that’s screwing everything up called “story progression.” Players were supposed to be able to disable it, but a bug has kept that from happening, and players are sounding off on the boards. The deleting families thing is the worst, but players also really wish it could be customizable, or have prompts, so they can own what happens a bit. Players feel that while the feature was supposed to enable story-telling on a massive scale, it really just generates randomness. Which makes sense, because that’s what a computer does. Story telling is what people do. So I think we’ve found the limits of The Sims.

While I was deep in Sims 2, I wrote an article for grad school about another Sims 2 player. There’s something sad about it; you’re living a digital life during a time you could have been living one yourself. I thought it might make a good story. My professor did too, and mentioned it to a visiting editor from Rolling Stone. The editor said he got pitches every day about The Sims, and wasn’t interested. If someone dies playing the game, then we’ll do a story, he said. The number of pitches tells me that either something really profound is going on here, or everyone else read the Klosterman essay, too.

Incidentally, when I started over with Sim Quad, I edited her to have a few of my better traits. I took out perfectionist and easily impressed and added nice and good sense of humor. I left neurotic in because, I mean, I want it to be a little real. Sim Quad wants to check the stove and sink — to make sure they’re off, I guess — about three times a day. That’s just a few times less than I check them IRL.