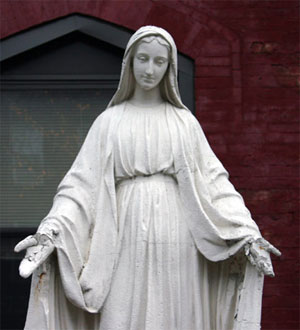 (To read the first installment, written by slb, go here.)

The town in which I was born and raised, Clinton, Arkansas, is deep in the sparsely populated Ozark Mountains in the Bible Belt. Both of my parents were born there as well, but spent some of their childhoods in different states. My father’s parents were migrant farmworkers who picked tomatoes and cherries in the northern Plains states and moved back to Arkansas when he was a teenager.

My mother’s father’s family lost their farm in the Dust Bowl and moved to California, where he met my Portuguese grandmother. He rebought the farm and moved back, but spent the first decade or so of my mother’s life working for the United States Postal Service. They lived in Wyoming and the Dakotas and California again, for a brief time. That latter home is the pre-Arkansas era my mother remembers most, and when they moved back to Clinton she and her four brothers and sisters were perpetually tanned and used to others taking their Catholicism for granted.

They might have made up the entire Portuguese population of Arkansas, and were a sizable percentage of the scant Catholic population of Van Buren County. Mom’s peers were convinced that the Latin on the altar cloths was proof that Catholics worshipped two false idols, the Virgin Mary and the Devil. She said her teachers always asked her, in the faux-solicitous way of the ignorant and proud, whether there was anything she wanted to confess. Maybe she was never particularly devout, but this did nothing to endear her to her mother’s religion.

Until I was old enough to ask about it we did not go to church at all. By early elementary school, my sister and I had both encountered questions about whether we’d been saved* and what church we went to. This was a place in which children thought, and probably still think, that the world’s major religions are Baptist, Methodist, Church of Christ (not to be confused with UCC) and Pentecostal. Not going to church was a little like saying, “You all continue to speak English.  We’ll go ahead and converse in Esperanto.” We asked our Mom to take us.

At some point, we were invited by my dance-class friend Amy to her Southern Baptist church, which was halfway between the town we lived at the time, Shirley, and Clinton, where we took dance and moved soon after. The Sunday School teacher told my little sister, who was generally not well behaved, that she was so bad the Devil would open the ground and get her. Nightmares about that very thing happening ensued; our days were numbered at PeeDee Baptist Church.

Soon, the rest of our dance friends invited us to go to the United Methodist Church in Clinton. The Methodist church in the south is considered liberal, and it’s much more staid and less charismatic than some Methodist churches I’ve found in the north. We stayed there for the rest of  my childhood. I was an altar girl and was confirmed when I was sixteen. My mom never considered herself particularly religious but, instead, spiritual. The church fed that notion, inviting Hindus and Buddhist and Muslims to speak to the grown-ups’ Sunday school class, and hosting several in-depth Bible studies courses that met at night. It became the spiritual home for the town’s only Jews, ex-Lutherans, and most of the people who came from the North to retire in the nearby community built to lure them.

My preacher at the time was an Italian ex-Catholic who had studied Latin and Greek and treated the church as another place for scholarship. He had a master’s degree, and referred to the Bible as “ancient poetry” after every Scripture reading. You have to understand, this is a place where my dad’s old co-worker, a heating and air specialist, got the calling and started running a Baptist Church without any kind of training whatsoever, like something out of a Flannery O’Connor novel. If you live in a place where people believe the word of God is actually bound in leather by Him and sent from the sky, you don’t treat studying the Bible as scholarship. It is a manual for living. So the church home we’d stumbled into was not going to answer the criticism we’d always felt from our peers.

I became really involved, and by the time I was confirmed I had noticed two things; my church did not have a youth ministry and we did not have church on Wednesday nights, like other churches did. So I started the youth group to meet on Wednesdays, and we discussed the ethical dilemmas of things like abortion and euthanasia. As you can imagine, I put that effort high on my college applications. My mother and godmother used to say that if God ever found me, and spoke to me, I would feel it. One Sunday afternoon I found myself at church and walked through a newly completed prayer garden. It was winter, and the setting sun hit the spot I was sitting in, almost exactly. This, I thought self-consciously and self-importantly, was my God Moment. It was the God-moment in the movie of my life.

Two weeks before I went to college, my sister, who was a year younger than me, died. We had the funeral in the Methodist Church, and so many people came they could not fit into the sanctuary. The Fellowship Hall was opened up with speakers linked in for them to hear.  Two weeks later I was at school, meeting my dean and a therapist with my parents about the event. I don’t know why my dean brought this up, but she asked about religion, and my mom said we went to the Methodist church. My dean put me in touch with the minister there, and the church was a conveniently short walk from campus.

I went one Sunday. It was extremely small and creakily old, and right across from the huge Gothic stone First Presbyterian Church that clearly got all the tithing in town. The minister was nice enough, but nothing particularly nice happened that Sunday. Nothing bad happened either, except I did notice that people held their hands to the air when the prayed, and they did not recite the Apostle’s Creed. It seemed more like the Pentecostal services I had been to. Had it felt more like home, maybe I would have continued to go. But it didn’t, and so I didn’t. I couldn’t go home to Arkansas often, and my scholar-preacher left soon after I did for a bigger congregation farther south. As part of his philosophy, he cut off most contacts, because we had a new church leader now and he had a new flock. I stopped going to the church at home as well. I studied Anthropology in college, and it was nearly impossible not to see religion for what it is in the context of all human myth-making, a quest for meaning, an endeavor to understand. But it is human-made, and that is all.

There are plenty of events pop-psychologists could point to as the Thing That Cost Me My Faith, but I can’t say I was ever much of a believer. As an adult, I can look back on my church-going childhood and say it was the only place I could go to that attempted any philosophic inquiry. There are few places in the South where people gather, and no place that provides information. People are not members of  unions, they do not work in offices with diverse groups of co-workers, there are no bars or restaurants or coffee shops. People take their children to school and go to their football games and go to church. They go because they crave people and they crave talk. I got older, and went to school, and moved to New York, and other places filled that void for me. Better than church ever did. At the end of the day, I never could buy that invisible man in the sky thing.

I’m not even passionate enough to call myself an atheist; I just don’t care. It turns out there is no manual for life. I’ve never believed humans are as special as we’d like to think, and when we die we go back to the earth as we came out of it, just like everything else does. That to me has always been more comforting, and more meaningful.

*You should really see the movie with Mandy Moore.