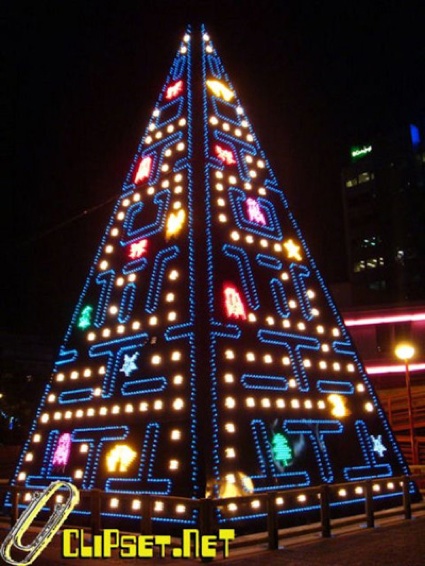 The Pac-Man Christmas Tree in Barcelona.

An ‘Unimpeachable Choice’. Obama picks Eric Shinseki to head up Veteran Affairs, and as seems to be the narrative with many of his choices so far, it’s received simultaneous praise for its pragmatism and its symbolism. Shinseki is a wounded combat veteran and the first Asian-American to become a four-star general. He was also a notable critic of the Bush administration’s plan to invade Iraq, saying that in order for the plan to work, it would need about half a million troops. Fallows: They have selected a wounded combat veteran; a proven military leader and manager; a model of personal dignity and nonpartisan probity: an unimpeachable choice. … As for the other symbolic element — that Obama is elevating the man who was right, when Rumsfeld, Wolfowitz, Cheney, et al were so catastrophically wrong — that is something that neither Obama nor anyone around him need say out loud, ever. The nomination is like a hyper-precision missile, or what is known in politics as a “dog whistle.” The people for whom this is a complete slap in the face don’t need to be told that. They know — and know that others know it too. So do the people for whom it is vindication. And all without Obama descending for one second from his bring-us-together higher plane.”

They Don’t Dance No Mo’. David Gregory was officially named the permanent host of “Meet The Press.” (Answer the question, Congressman, or get served on national TV.)

Still Hooked on Them Cancer Sticks, Maybe. Also on MTP, Obama gave a very political answer when asked if he quit smoking. “What I would say is, is that — that I have done a terrific job, under the circumstances, of making myself much healthier.” There’s been a lot of chatter about whether Obama is “black” or not. We think the answer ultimately rides on this question: does he smoke menthols?

Bush Digs In. The Bush administration continues to move personnel around and hire them for permanent government jobs, ensuring that his imprimatur will remain on American policy long after he’s left office.

Going for Transparency. The incoming administration is making “all policy documents from official meetings with outside organizations will be publicly available for review and discussion” on change.gov.

Still No Winner in Minnesota. Nate says the Senate race is likely headed to court.

Replacing Dollar Bill. Louisiana voters put the corrupt “Dollar Bill” Jefferson out on his ass, replacing him with Anh Cao, a former seminarian and community organizer. He’ll be the first Vietnamese American in Congress, and he’ll have a tough task ahead of him: trying to remain in the good graces of his deeply Democratic constituency and House Republicans at the same time.

See You at the Crossroads. Stereohyped, the year-and-a-half-old blog that was a clearinghouse for black pop culture, is no more.

Extending You a Digit That Ain’t  a Thumb. Some readers were criticizing Robert Ebert for not reviewing eXpelled, Ben Stein’s controversial, uh,  documentary that defends intelligent design. The generally affable Ebert finally obliges by going in, writing a review in which he completely vivisects the film, the premise behind it, and the shaky logic that holds it together. “It fills me with contempt,” he writes.

Beefin’ With Bill-O. Rick Hertzberg explains how he was ambushed and dragged into a back-and-forth with Bill O’Reilly.