Of Quarterbacks and Classrooms. 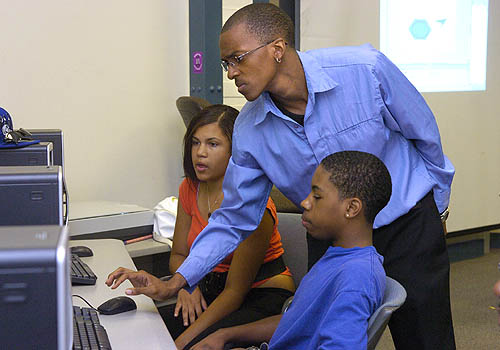 Each year, the N.F.L. administers an IQ test called the Wonderlic,  which is supposed to gauge how smart a football prospect is and project how good he’ll be as a pro. It’s given special weight in evaluating college quarterbacks, a job that is so complicated and dangerous on the professional level that it’s amazing that anyone is even competent at it, let alone excellent. Each year a big deal is made about the Wonderlic score — Vince Young got a what???? — even though it’s pretty clear that the Wonderlic doesn’t guess future QB performance with any kind of effectiveness.  That’s why relatively low Wonderlic scorers like Donovan McNabb of my beloved Philadelphia Eagles go on to become Pro Bowlers while high scorers like Tim Couch fade into obscurity.

But that’s not the Wonderlic’s fault, really; there’s precious little about taking a test in a controlled classroom setting that translates into having to make five decisions while an ungodly fast behemoth is trying to slam into you in front of 75,000 people.   Malcolm Gladwell argues that the only real way to tell how good a prospect will be as an N.F.L. quarterback is to see them play in an actual N.F.L. game.

So it goes for schoolteachers, he argues. There is considerable upshot in picking a great teacher: an economist at Stanford says that an excellent teacher can negate and overcome the deleterious educational effects of crowded classrooms and even shitty schools. (Bad teachers, conversely, can offset the benefits of going to an otherwise excellent school.) Obviously, we need more excellent teachers. But earning a masters in education or a teaching certificate has almost no bearing as to whether someone will be a great teacher in practice. “The school system,” Gladwell writes, “has a quarterback problem.”

Gladwell sat in with a group of education experts who are watching video of teachers in classroom settings for evaluations. The conclusion they come to over and over again is that being a good teacher is almost entirely instinctive.

As [the panel] played one tape after another, the patterns started to become clear. Here was a teacher who read out sentences, in a spelling test, and every sentence came from her own life—“I went to a wedding last week”—which meant she was missing an opportunity to say something that engaged her students. Another teacher walked over to a computer to do a PowerPoint presentation, only to realize that she hadn’t turned it on. As she waited for it to boot up, the classroom slid into chaos.

Then there was the superstar—a young high-school math teacher, in jeans and a green polo shirt. “So let’s see,” he began, standing up at the blackboard. “Special right triangles. We’re going to do practice with this, just throwing out ideas.” He drew two triangles. “Label the length of the side, if you can. If you can’t, we’ll all do it.” He was talking and moving quickly, which Pianta said might be interpreted as a bad thing, because this was trigonometry. It wasn’t easy material. But his energy seemed to infect the class. And all the time he offered the promise of help. If you can’t, we’ll all do it. In a corner of the room was a student named Ben, who’d evidently missed a few classes. “See what you can remember, Ben,” the teacher said. Ben was lost. The teacher quickly went to his side: “I’m going to give you a way to get to it.” He made a quick suggestion: “How about that?” Ben went back to work. The teacher slipped over to the student next to Ben, and glanced at her work. “That’s all right!” He went to a third student, then a fourth. Two and a half minutes into the lesson—the length of time it took that subpar teacher to turn on the computer—he had already laid out the problem, checked in with nearly every student in the class, and was back at the blackboard, to take the lesson a step further.

“In a group like this, the standard m.o. would be: he’s at the board, broadcasting to the kids, and has no idea who knows what he’s doing and who doesn’t know,” [the lead researcher] said. “But he’s giving individualized feedback. He’s off the charts on feedback.” [He] and his team watched in awe.

This all leads Gladwell to suggest that teacher qualifications should be less rigid.

They suggest that we shouldn’t be raising standards. We should be lowering them, because there is no point in raising standards if standards don’t track with what we care about. Teaching should be open to anyone with a pulse and a college degree—and teachers should be judged after they have started their jobs, not before. … It needs an apprenticeship system that allows candidates to be rigorously evaluated. Kane and Staiger have calculated that, given the enormous differences between the top and the bottom of the profession, you’d probably have to try out four candidates to find one good teacher. That means tenure can’t be routinely awarded, the way it is now. Currently, the salary structure of the teaching profession is highly rigid, and that would also have to change in a world where we want to rate teachers on their actual performance. An apprentice should get apprentice wages. But if we find eighty-fifth-percentile teachers who can teach a year and a half’s material in one year, we’re going to have to pay them a lot—both because we want them to stay and because the only way to get people to try out for what will suddenly be a high-risk profession is to offer those who survive the winnowing a healthy reward.

I basically agree with this, but while Gladwell raises the issue of how one would drum up support to pay for this new system, he doesn’t really answer it.  I also think that the arguments for higher teacher pay leave out market competition from outside the teaching field. If there were greater pecuniary benefits for teachers, we would be enticing candidates who would otherwise never consider the classroom. There are undoubtedly plenty of people in the private sector who would, say,  make great chemistry teachers but know they could make more money by working for Procter & Gamble.

There are obviously problems with this, as well. We’d still have to measure just how effective the teachers were in order to weed them out, which would mean the continued use of standardized tests, which measure something, I suppose, but certainly don’t measure learning.