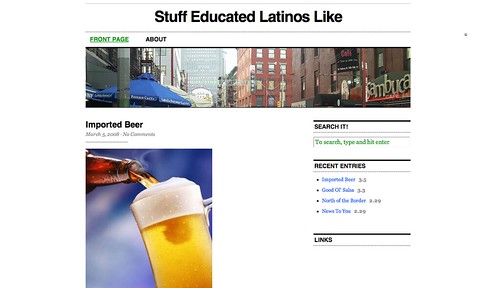 Also, Gary Dauphin over at The Root gets at some of our issues with StuffWhitePeopleLike.

…SWPL also smells like a classic racial con-job. It goes without saying that the specific entries (Oscar parties?) don’t really apply to anyone. That makes Landers’ overall pose–and the uncritical response to it–the real action. You’d think from the approving hubbub that SWPL had discovered (white) America or something, but white comedians, academics, and artists have been thinking and cracking wise about “white” culture since before Landers was in, well, short pants (#86). Usually, even jokey talk about whiteness has a whiff of danger to it, but SWPL is likely the safest, most affable racial satire ever, a loving high-five between friends passing as critique. …

If SWPL has an immediate precedent, though it’s not the gleefully absurd Black People Love Us! but the direly depressing Hot Ghetto Mess. Like SWPL, Hot Ghetto Mess presented itself as an “inside” look at a given demographic’s “mess” for the purported purposes of humor, education and uplift. It was, of course, nothing more than the worst (best?) kind of Internet hustle, the site riding repackaged and cheaply available (as in free) web photos and video all the way to an ill-fated BET TV tie-in.

Borrowing from the Hot Ghetto Mess playbook, SWPL not just monetizes dime-a-dozen and banal observations, but relies quite directly on an uncredited, nameless class of people of color. Landers grew up in Toronto’s Chinatown and credits the experience as having made him “aware of whiteness right away.” In a Los Angeles Times interview, he goes on to explain that he “came up with the idea for the blog after talking to a Filipino friend about how much they both liked the HBO police drama “The Wire.”” That’s a great secret origin, securing Landers’ bona fides as a whitepeoplecoloredpeoplelike, and yet the SWPL entry on The Wire (#85) summarily disappears (or is that assimilates?) the Filipino friend, this even as Landers seems to write in his non-white voice. (I guess stuffmeandmyfilipinofriendslike.com didn’t have that magic ring.)

We’ll have to forgive our beloved Wire for spawning this whole meme.