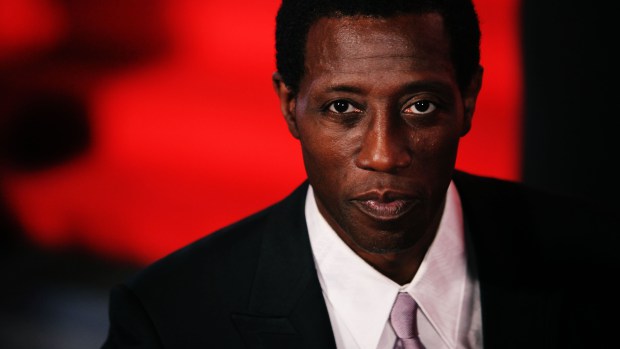 Yesterday morning, Entertainment Weekly posted a rather engaging article about Wesley Snipes on its website. The piece chronicles the actor’s fall from public grace, his recent spate of straight-to-DVD films (His last five have gone the way of the Blockbuster shelf), and his ongoing legal woes — from the Blade:Trinity battle supposedly responsible for his “blacklisted” status in Hollywood to his multimillion-dollar tax evasion case in which he faces 16 years in prison.

The whole time I was reading the five-page piece, I thought, “See if there won’t be thousands of Black women reading this today and muttering, ‘Good.’ under their breath.” What would lead me to imagine an army of sisters, arms firmly crossed over their chests, feet tapping a “what-goes-around-comes-around” cadence on the floor?

So I did a simple Google search. “Wesley Snipes Black Women,” I typed. The search yielded this: the complete text of Snipes’ 1997 interview with Ebony contributor Lynn Norment. Here’s what he actually said:

The Asian model and restaurateur he introduces as “my lady, Donna [Wong]” has been Snipes’ companion for the past year and a half When asked if he dates Black women, he says: “Primarily all of my life I’ve dated Black women…. Oh, most definitely. Oh, my God. Mostly. But it just so happens that now I’m dating an Asian woman. It’s different. Different energy, different spirit, but a nice person.” He says he is not ready for marriage; nor is Donna. “She’s got to learn to deal with the love scenes in the movies first,” says Snipes as he chuckles. “Got to get to a place where it’s very comfortable.”

Wesley says he realizes that there are Black women still who get an attitude about Black men with Asian, White or Hispanic women. “I know we’ve all been hurt, and we’re all very wounded,” he says, addressing Black women. “We have to acknowledge that, both male and female, in the Black experience. We’re a wounded people. And we want to possess and we want to own. We don’t want to compromise. We feel like we’ve compromised enough. But in any relationship you have to compromise. There’s no way around it. And I say to Black women also, Brothers who are very, very successful, or who have become somewhat successful, usually it’s been at a great expense, unseen by the camera’s eye….

When asked for clarification, Snipes emphasizes that he is not saying that a Black woman can not be that type of woman a man wants to come home to. “Not at all,” he declares. “Absolutely not. That’s the point. I want to come home and I don’t want to argue. I want to be pleasing, but if I ask you to get me a glass of water, you’re going to say, `Them days is over.’ please. Come on,” Wesley says. “A man likes that. I don’t know why. It’s been that way forever. It makes him proud, you know, like when the guys come over and your lady comes out with a tray of food and says `I made this up for you.’ And the guys are like, `Oh man, you’ve got a great woman.’ And the man says, `Yeah, I do.’ A man will appreciate it when you’re kind and when you’re nice.

“For successful women, it’s hard,” he continues, obviously quite comfortable and articulate on the subject of relationships. “The competition is fierce. And if he’s a man of success and power who happens to be handsome, of course you’re not the only one who thinks he’s handsome. But you don’t have to punish him because of that once you get with him. Don’t punish him because somebody else likes him.”

Continuing with his openness, Snipes says he’s had his heart broken more than once, and at times by Black women. “Most definitely. Most definitely,” he says.

So perhaps we can just put this rumor to rest, once and for all. No one’s saying that Snipes’ claims weren’t problematic or that, no matter what he meant, what he said had the potential to (and did) offend. It’s just that nowhere in this article did he say that he hates Black women. He also never said that he’d never date Black women again (or that other Black men should follow suit). So maybe we could all just cool out on the histrionics, okay?

Entertainment Weekly’s article references Snipes’ current wife, Nakyung “Nikki” Park. She’s Asian. No big. Personal preference, right? Even so, I thought the sight of her might dredge up old feelings (and rumors)–and really, with the kind of problems this man has, rolling down that road once more will benefit no one.

You know what else won’t benefit anyone? Snipes claims that “systematic racism” is to blame for his Hollywood shut-out. And for his tax problems. We’re not saying that an all-white jury seating shouldn’t rankle a brother. But wouldn’t it have made more sense to cross your Ts and dot your Is in the first place? Isn’t it a bit more difficult for The Man to get at you for tax evasion when you’re not looking for ludicrously high tax breaks and refusing to pay at all for multi-year blocks?

Wesley Snipes: making bad PR and personal decisions since 1997 (though none of them include hating Black women).