The Move Bombing, 30 Years On. 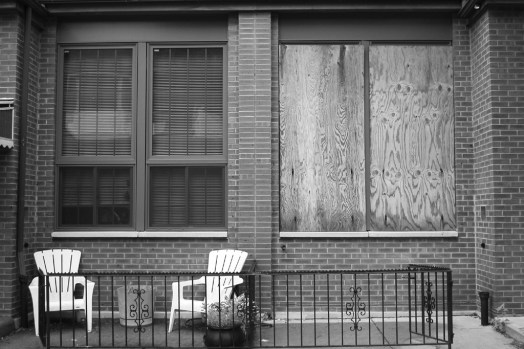 An occupied home and an abandoned home on the MOVE block. Sixty-one rowhouses on the black, mostly middle-class block in West Philly burned down in the bombing of May 13, 1985. The city rebuilt the homes, but they were shoddily constructed, and eventually officials offered buyouts to the residents on Osage and Pine. Most took them; today, 37 of the 61 homes sit vacant, boarded up and padlocked. (flickr via @cjelli)

I went home to Philly last week to try and fill in some blanks in my understanding of the police bombing of Osage Avenue back in 1985, when I was about four years old. It’s the kind of story that makes less sense when you know the details: the police literally dropped a bomb on a radical group called MOVE that holed up in a rowhouse in a middle-class black neighborhood in West Philly. The resulting fire destroyed 61 homes; 11 MOVE members, including five children, died in the blaze. No one in the police department or the city government would face any consequences.

I talked to Steve Inskeep on NPR’s Morning Edition about it yesterday.

I spoke to a cat named Gerald Renfrow, a man in his late sixties who has lived on the block where the bombing happened for his whole life. His parents lived there, he raised his kids there, he beefed with MOVE when they were on the block and has been fighting the City of Philadelphia to do right by the residents whose homes they burned to the ground. And I spoke with Ramona Africa, who was the only adult who made it out of the burning MOVE compound alive.

There’s a great documentary on the MOVE bombing called Let The Fire Burn that came out in 2013. It’s told entirely through archival news footage. the narration comes principally via testimony from hearings after the bombing — you get the perspective of residents, the mayor and city officials, members of the police brass, the fire department, and MOVE members themselves. It’s definitely worth your time.