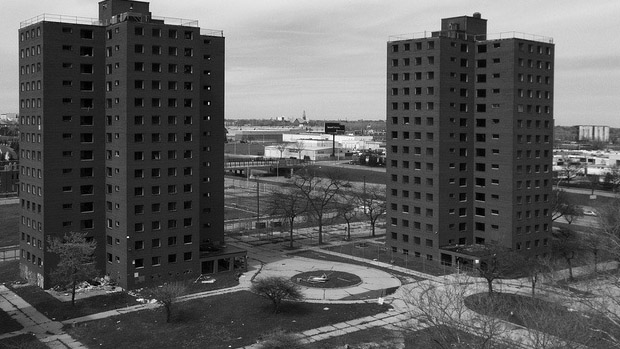 The Brewster-Douglas Housing Projects were built by the city of Detroit between 1935 and 1955 and were intended for the “working poor.” In the 1960s and 1970s, crime in the projects became prevalent and they fell into disrepair. (via Juan N Only, CC 2.0)

There’s very little new in American politics, and that’s especially true in our debates over racial inequality. For example, here’s the Wall Street Journal’s Jason Riley in an editorial from July 31, 2014:

People often lament the quality of black leadership in America today, but in some ways it’s a sign of progress. If blacks were still facing legitimate civil rights issues—like legal racial discrimination and voter disenfranchisement—that would attract the best and brightest of black America to the cause. But serious people like Thurgood Marshall and Martin Luther King and others fought and won those battles a half-century ago. What we have left today as civil-rights leaders are second- and third-tier types striving for relevance in an era when the biggest barrier to black progress is no longer white racism but black anti-social behavior and counterproductive attitudes toward work, school, marriage and so forth.

And here’s conservative economist George Stigler, as quoted by Geoffrey Kabaservice in Rule and Ruin, in the December 1965 issue of New Guard, the official publication of Young Americans for Freedom:

[C]onservative economist and later Nobel Prize winner George Stigler claimed that the basic problem of the black American was that “on average he lacks a desire to improve himself, and lacks a willingness to discipline himself to this end.” The African-American male’s lack of employment owed not to discrimination but to “his own inferiority as a worker.” Residential segregation existed because “the Negro family is, on average, a loose, morally lax group, and brings with its presence a rapid rise in crime and vandalism.” Equality for African-Americans would arrive only when they imitated the virtues of an earlier generation of Jewish immigrants: “a veneration and irrepressible desire for learning; frugality; and respect for the civilization of the western world.”