The Life of Jordan Davis. 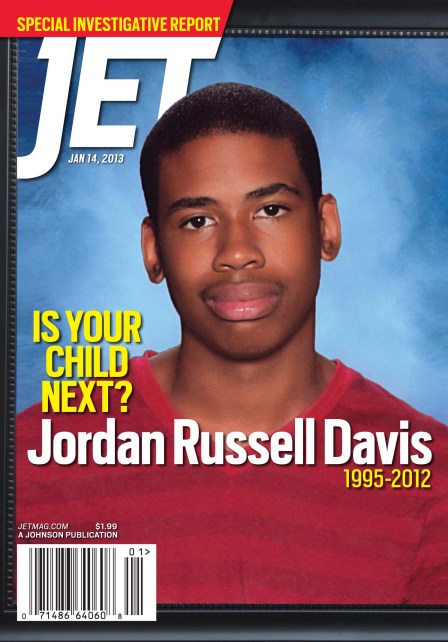 Here’s Ta-Nehisi on Jordan Davis’ shooting, and his killer escaping punishment — for now at least:

I insist that the irrelevance of black life has been drilled into this country since its infancy, and shall not be extricated through the latest innovations in Negro Finishing School. I insist that racism is our heritage, that Thomas Jefferson’s genius is no more important than his plundering of the body of Sally Hemmings, that George Washington’s abdication is no more significant than his wild pursuit of Oney Judge. I insist that the G.I Bill’s accolades are inseparable from its racist heritage. I will not respect the lie. I insist that racism must be properly understood as an Intelligence, as a sentience, as a default setting to which, likely until the end of our days, we unerringly return.

In fairness to Florida, it’s not as if this—white fear as an adjudicating factor for black life—is a new thing. It’s the force behind the lynching epidemic of the early 20th century, the racial terrorism of the 1920s, and the economic assaults—riots and redlining—of the post-war period. And for all of the real problems of the current moment, there was a belief that we had put that behind us. Which is one reason why this case is so jarring. No, “Stand Your Ground” isn’t as egregious as the worst of Jim Crow, but there’s no denying that it harkens to a time when you could shoot first and never ask questions, as long as the victim was a black person.

I think I speak for many black people when I say that’s terrifying.

Somehow, amazingly, I got the chance  to sit with them in a studio at the day-job to talk about all of this. You can hear the segment that aired on Morning Edition here. And you can hear the longer version of my conversation with TNC and Jam-rock below. (Some choice stuff — Jamelle talking about Tony Judt and postwar Europe’s response to their racial atrocities, and a long aside about the practicality of reparations — got excised. ) This isn’t a PB podcast — one’s coming soon! — although I wish it were.