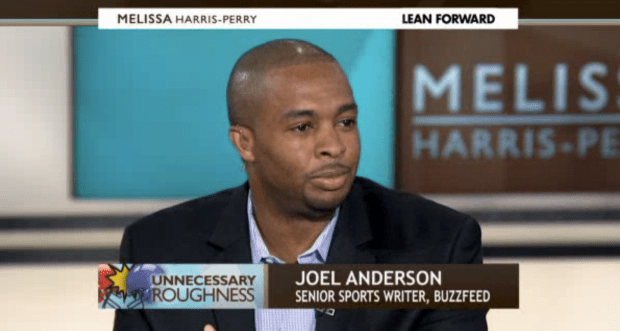 PB’s own Joel “blackink12” Anderson had himself a hell of a first week at Buzzfeed, topped off with an appearance on Melissa Harris-Perry’s show on MSNBC Saturday morning. Joel dropped in to talk about the NFL’s settlement with former players who suffered football-related brain and neurological damage.

It makes sense that Joel was asked to weigh in on this — he’s talked candidly about his own experiences with football and head trauma here at PB. He remembered a hit that knocked him out when he was a high school running back in Texas and his day-job has written about a top lineman prospect who had sustained so many concussions during his high school years that doctors said he might die if he kept playing in college.

You can see the former Giants lineman Roman Oben doing the contortions that so many people do when dealing with brain injuries in football. We’re teaching people to tackle differently. Calls to ban the game are alarmist. But as Joel pointed out on the show, you can’t extricate violence from a game predicated on it.

“I don’t really think there’s a way to make football safer,” he said. “I think that you can legislate some of the more dangerous hits, some of the more projectile-type hits, but we’re still talking about people who the goal is to run into each other and to score. They’re only going to be able so much. And long-term, we’ll have to ask ourselves: are we willing to live with that?”

Last year, Ta-Nehisi Coates dropped by the PB podcast and said that he couldn’t — after a lifetime as a Cowboys fan, he just wasn’t willing to try and square his football fandom with all that attendant carnage. Something had to give.

You can watch the rest of the segment with Joel — in which the panelists talk about whether college athletes should be compensated — here and here.