Home » Browse PostBourgie » A Slice for My Toddler, a Reality Check for Me

A Slice for My Toddler, a Reality Check for Me 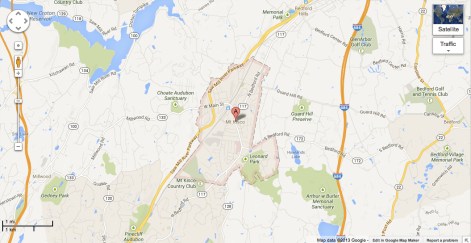 Treating our hungry toddler to his favorite meal during a four-hour car ride seemed a pretty easy task: Any decent small town off the Saw Mill Parkway had to have a pizza joint, right? So it was that we found ourselves at a spare storefront restaurant in Mount Kisco a few weeks ago.

It was all good until my husband went for seconds and was quite obviously ignored at the counter, waiting while the owner served a group that had entered after he stepped up.  When he finally got his slice and came back to the table, our son was shyly babbling with the kid in the neighboring booth, who we learned was the same age, 20 months. The owner appeared again – a petite, middle-age woman whose overdone makeup made my pores cry out in the sweltering heat – and swooped in to fuss over the other child, loudly offering him a special dessert, out of nowhere. She swept past us to pick him up and bring him behind the counter, where a sugar-dusted cookie was handed over with great flourish. Our son she seemed determined not to see.

This is probably a good time to mention that I’m black, and my husband is white. He posited, sotto voce, that this was behind the owner’s antics, saying, “I don’t think it’s intentional.” I think he meant it to be comforting, but as my son happily munched his pizza, all I could think of was getting out of there. Just for good measure, the owner caught my eye with a steely look and a gave me a curt, “Do you need anything else?”

To be clear: This is about as benign a racist encounter as you can get, not really even worthy to be retold, except … that’s the whole problem with racism: It doesn’t always pair with ill intent. It’s not just a problem of “evil” people. It doesn’t show itself merely in the use of slurs or violence.

I would counter, in fact, that in an era when Barack Obama can be elected president — twice — but studies still show that people of color are treated differently, from hiring and homebuying to policing, racism is often more underground, imperceptible, and even unintentional than ever.

Case in point, from one of the big news stories of the day: A new study by the Urban Institute on “Stand Your Ground” laws — now infamous after the killing of Trayvon Martin last year — found that the killings of black people by whites were more likely to be considered justified than the killings of white people by blacks. There’s no racism written into the law, of course, but the enforcement of it ultimately rests with fallible, less-than-objective human beings.

On a less inflammatory topic, a recent study by the Department of Housing and Urban Development found that people of color were shown fewer homes than their white counterparts with the same credentials — and were less likely to get discounts on their rents. But get this: All the customers said they felt that they had been treated fairly and courteously. It’s quite possible that the real estate agents’ unequal treatment was unintentional. And that’s why this ingrained, subtle prejudice is so slippery: If you don’t know your actions are tainted by racism – or that someone else’s are, for that matter – how can you possibly fix it?

So much of today’s racism is like this: under the surface, shifting our interactions without our realizing. Is it preferable to the days of lynching and poll taxes? Sure. But sitting in that pizza parlor as reality dawned on me, I went from solemn sadness to a breathless terror for my oblivious, innocent 20-month-old.  The rifts that separate us, that bring us to judgment based on something none of us can control – they don’t spare him now, and they won’t spare him when he’s a young black man instead of an adorable, racially ambiguous toddler. It might mean hurt feelings during grade-school recess, a lost job opportunity, or fewer housing options, yes. But the real point — the real punch in the gut to a new mother of color — is that this is the same racism that transforms a gangly teenager out for snacks into a threat, and then a corpse.

Latest posts by Mediatress (see all)