Confession: I Didn’t Vote on Tuesday. 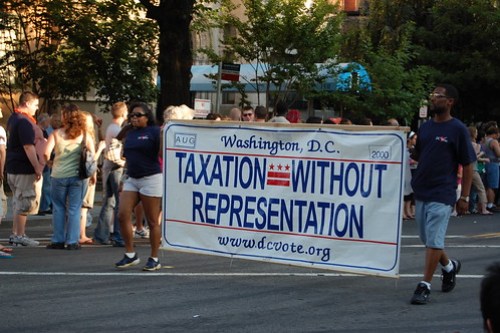 Confession: I didn’t vote on Tuesday.

I’ve not voted before. In 2006, when I lived in New York, I was away for my dad’s funeral. There were other years, too; years when the New York mayor’s race seemed like a lock, or years when the only elections were for local races in my small Pennsylvania college town and I didn’t feel like I had the right to interfere with long-time residents’ desires. Sometimes, I feel that way now with local races, though I’ve lived in the same place for a little more than three years. But I’ve always tried to vote in presidential elections. I think it’s important and it feels patriotic.

This year, I found out in late October that I was going to be away from Washington, D.C., the city I call home, on Election Day. I had a week before I flew out of town to figure out early voting. Now, I consider myself an educated, informed person, but this process was still kind of hard to navigate. The D.C. elections website said that early voters had to go to their regular polling places to cast an early vote. I went to Dunbar High School after work one day, and the security guard told me there was no voting, and I should come back during the school day. I printed up my request for an absentee ballot and mailed it in right before I left town.

The problem may have been Superstorm Sandy or maybe that I request too late, but I never got my absentee ballot. I wasn’t on the list of absentee voters. It was too late to do anything about it, and I was far away and working. More important, there was no real reason my vote would count for a lot. D.C. has three pitiful electoral votes for its half-million residents, because it’s not a state. (By law, it can never have more electoral votes than the least-populous state does.) It’s heavily Democratic, and voted for President Obama’s re-election by 91 percent. We have no Senators, or Congressional delegation with voting powers. D.C. is more populous than Wyoming and almost as populous as Vermont but every city resident is permanently disenfranchised because the founders never imagined the swampy capital they were building would become a vibrant metropolis. That the city was majority black until 2011 and has a poverty rate of about 18 percent should explain why there hasn’t been a national outcry. But there’s outcry in the city: the license plates on cars registered here display the slogan “Taxation Without Representation.”

Despite knowing all that, I felt uncommonly lonely and left out on Election Day as I interviewed voters who were excited to cast their ballots. I saw voters rush in from a long day at work. At a polling place in the working-class city of Aurora, Colorado, nurses who’d been standing on their feet for 12-hour shifts came to the polling place to stand on their feet for two hours more just to vote. My vote wouldn’t have counted, except to me.