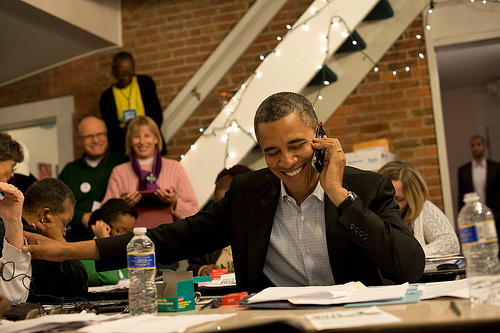 Packing as much #FAIL as possible into just a few minutes of airtime.

Adam isn’t so sure that this “new Democratic majority” will be so long-lived:

Absent a successful Democratic-led effort at immigration reform, for example, the Latino vote likely remains up for grabs. Young voters could grow disillusioned by an Obama administration that continues its aggressive prosecution of the war on drugs. Someday, religious conservatives may realize that observant American Muslims are natural allies rather than domestic enemies. The success and permance of Obama’s new coalition, and of American liberalism, depends on what happens now—particularly whether the American economy recovers enough in the next four years for Obama and the Democratic Party to be able to claim credit for restoring prosperity, not just bringing the country back from the brink.

When Chicago’s first black mayor Harold Washington figured out how to assemble a progressive coalition of wealthy Chicago whites and people of color to win his office, he created a blueprint that Obama has used to fundamentally alter the political playing field of this country.

Twice now, the President has won office while losing virtually every Southern state, proving that his 2008 triumph over the Southern strategy was not a fluke. The progressive, multi-racial political coalition that delivered him his victory could enjoy several decades of electoral dominance because the browning of America will only strengthen it.

Monica spoke to an undecided black voter in Colorado:

“Obama really hasn’t did shit,” [Johnson] said, but he also didn’t believe Mitt Romney was going to follow up on his campaign promises. He believed women had the right to choose their reproductive destinies, but he was also worried about the deficit. Johnson could vote, but he didn’t feel … enfranchised. He was sick of ads, and he hadn’t heard a single politician of either party reach out to the community of men who’d spent time in jail and struggled to make it once they were out. “If I don’t vote I understand I can’t say nothing,” he said.

Johnson didn’t spout talking points, and wasn’t misinformed. There was no reason he could point to as to why he should or shouldn’t vote. He’d gotten the message that his vote in Colorado would count. He just wasn’t sure he wanted to be part of the process. That’s a problem no ad could solve.

Brentin on the interminable lines that many  black voters faced:

Black voters came out in droves also, despite laws and poll watcher groups targeted for their discouragement. In Florida, many black voters waited hours in line under the hot sun while sustaining power outages and malfunctions with ballot scanner equipment. When NAACP volunteers tried to offer them bottled water and chairs to sit down, they were confronted by Republican and tea party elections observers who accused them of buying votes with this charity.

Yglesias on the Republicans’ hurdles with Latin@s:

Polling suggests that the Latino problem for the GOP is deeper than immigration. John McCain got a scant 31 percent of the Latino vote despite a long record of pro-immigration policies. The best evidence available on Hispanic public opinion, a big election even poll from Latino Decisions and ImpreMedia, makes it clear that this is just a fairly liberal voting block. Just 12 percent of Latinos support a cuts-only approach to deficit reduction, and only 25 percent want to repeal Obamacare. Only 31 percent of Hispanics say they’d be more likely to vote for a Republican who supports the DREAM Act. This isn’t to say Latinos aren’t eager to see immigration reform, it’s just that the lion’s share have bigger reasons for rejecting the GOP.

Jonathan Chait says that by refusing to compromise with Obama on anything, Republicans wound up losing everything:

The policy consequences of that failed gamble are immense: Universal health insurance will go into effect, and when the Bush tax cuts expire on January 1, 2013, Obama will be able to restore a plausible stream of tax revenue without needing the ascent of the unbowed Republican House.

The political repercussions may be just as enormous. While any number of future events could intervene — Obama could lose his second term to a scandal, or a foreign policy crisis — he looks very well poised to consolidate and expand the electoral revolution that helped sweep him into office. The economic recovery appears to be gaining momentum — perhaps not quite soon enough to allow him to have run a Morning in America reelection campaign, but advanced enough for him to preside over a second term that feels like true prosperity. If Obama presides over a strong and continuous recovery, his approval will rise and his policies will be vindicated. He could cement the partisan and ideological leanings of his rising coalition.

Conor Friedersdorf argues that conservative news outlets did a disservice to their audiences by telling them only what they wanted to hear:

Barack Obama just trounced a Republican opponent for the second time. But unlike four years ago, when most conservatives saw it coming, Tuesday’s result was, for them, an unpleasant surprise. So many on the right had predicted a Mitt Romney victory, or even a blowout — Dick Morris, George Will, and Michael Barone all predicted the GOP would break 300 electoral votes. Joe Scarborough scoffed at the notion that the election was anything other than a toss-up. Peggy Noonan insisted that those predicting an Obama victory were ignoring the world around them. Even Karl Rove, supposed political genius, missed the bulls-eye. These voices drove the coverage on Fox News, talk radio, the Drudge Report, and conservative blogs.

Ross Douthat admits that he was part of the amen chorus:

You could also see this conviction shaping the punditry and predictions that issued from conservatives in the days leading up this election. It was remarkable how many analysts not normally known for their boosterism (I’m thinking of Michael Barone and George Will in particular) were willing to predict that Romney would not only win but win sweepingly, capturing states that haven’t gone Republican since Reagan. But even less starry-eyed conservatives — like, well, myself — were willing to embrace models of the electorate that overstated the Republican base of support and downplayed the Democrats’ mounting demographic advantage.

(If you haven’t seen it, you should peep the video of Karl Rove — conservative superPAC chieftan, former Bush adviser, and Fox News contributor — arguing with Fox’s “decision desk” that they shouldn’t have called Ohio for Obama.)

Recently the tide has turned against draconian laws that have sent pot offenders to prison while drug smugglers and gangs thrive off the black market. Thus more mainstream attention and credibility has been given to plans like the ones passed Tuesday that would regulate, tax, and sell marijuana to adults, just like alcohol, in both Colorado and Washington.

If not for establishment support, including from government figures, law enforcement and the medical community, these measures would never have passed. A medical-marijuana initiative in Arkansas and a legalization plan in Oregon did not pass last night because they did not have the same kind of support.

And TNC tries to figure out what it all means:

I am not sure what more to make of this. I would not say that the battle is over, but that some monster of American history, some wraith, some awful Power went into battle last night, and is presently limping away mortally wounded. The beast-handlers know this. I think it’s broadcast in Bill O’Reilly’s open racism, in Karl Rove’s flight into lunacy. It is slowly dawning on them: This isn’t 1968. The hippies are punching back.