Home » Browse PostBourgie » How to Be a Woman.

How to Be a Woman. 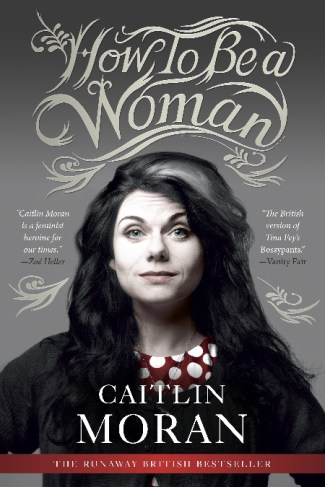 Cross-posted from The Feminist Texican [Reads].

Houston, we have a problem.

Caitlin Moran‘s How to Be a Woman, which was released across the pond last year with much success, was released in the United States this summer. It’s been marketed as a memoirish feminist manifesto, with Moran being billed as a British version of Tina Fey and her book being billed as a feministier version of Bossypants. Feminism, but more fun! Feminism that you can relate to! Feminism with an irreverent sense of humor! Every young woman should read it!

Yeah…no. I’ll be perfectly blunt here: the thought of this book serving as anyone’s introduction to feminism horrifies me.

The sad thing is that this book isn’t all bad. There were things I could get on board with, like real talk on abortion experiences or the distortion of media images or her experiences being harassed on the street as an overweight teen. It’s not perfect, but Moran adds a healthy dose of self-deprecating humor, and it’s a useful perspective that the book’s intended audience probably doesn’t hear enough of.

But then there are the other things, things she’s just so profoundly off the mark on, that I just cannot — will not — accept.

So much of what Moran says sound like it comes from a weird twilight zone of “feminism.” It’s a lot like those celebrities who say they support gay rights or a women’s right to choose, then make a point of scoffing, “But don’t worry, it’s not like I’m a feminist or anything!” Except in Moran’s world, she’s proudly proclaiming “YES I’M A FEMINIST!” while saying a lot of stupid shit so she can keep fitting in with the guys. Because this is cool feminism. Or something.

Let’s start with a subject near and dear to my heart, women’s history:

Even the most ardent feminist historian…can’t conceal that women have basically done fuck-all for the last 100,000 years. Come on — let’s admit it. Lest stop exhaustively pretending that there is a parallel history of women being victorious and creative, on an equal with men, that’s just been comprehensively covered up by The Man. There isn’t.

This really pisses me off for a couple of reasons. The first is that she’s distorting an entire academic field. I read a decent amount of women’s history; not once have I ever come across a serious historian claiming that there was a “parallel history” of women being equal to men. Like, ever. There is, however, a history of women’s contributions — some of them quite amazing — that would be buried and forgotten if not for this focus on women’s history. However, the real reason this flippancy angers me is because it is the same attitude used to dismiss Native American history, or Black history, or Latin@ history, or any other kind of history that isn’t white and European. This attitude has been quite the problem in the legacy of mainstream feminism. (Trust. I’ll come back to this.)

Since we’re on the subject of feminist legacies, let’s talk about the chapter that’s very much the heart of the book: the one specifically dedicated to converting people to feminism (a.k.a. An Illustration of What NOT to Do When Preaching Feminism).

Here is the quick way of working out if you’re a feminist. Put your hand in your underpants.

a. Do you have a vagina? and

b. Do you want to be in charge of it?

If you said “yes” to both, then congratulations! You’re a feminist.

There are tons of other problems with the book, but since the book is being marketed as fun feminism, I’ll just touch on Moran’s take on what her intended audience might consider fun: sexy stuff! Like pole dancing classes! And burlesque! But don’t you dare become a stripper:

pole-dancing classes, on the other hand, are fine! I know! Who would have thought!…In a world of infinite possibility, why not learn to hang off a pole by your pelvic floor? It probably will be more useful than learning Latin…So long as women are doing it for fun — because they want to, and they are in a place where they won’t be misunderstood, and it seems ridiculous and amusing…then it’s a simple open-and-shut case of carry on, girls. Feminism is behind you.

With burlesque, not only does the power balance rest with the person taking her clothes off…but it also anchors its heart in freaky, late-night, libertine self expression: it has a campy, tranny, fetish element to it.

Strippers are letting us down, feminism supports pole dancing classes, and it’s totally okay to use a derogatory term that hurts trans people on top of tying adjectives like “campy” and “fetish” to trans identities. Got it. Yay, feminism!

Which brings us back to that initial women’s history quote and the hurtful legacies of feminism that, as you can see, remain a problem to this day. Thing is, Moran has obviously done her feminist homework. I know from the way that she writes, and the names that she drops, and the quotes she uses, and the insights she has that she is well aware of feminism’s darker side.

So what is her problem? Why does this book have so many issues?

Earlier this month, Moran interviewed Lena Dunham to talk about her TV show, Girls. Someone on Twitter contacted Moran to ask if she had addressed the lack of representation of women of color on Girls (an issue that has been cropping up pretty much since that show first began): 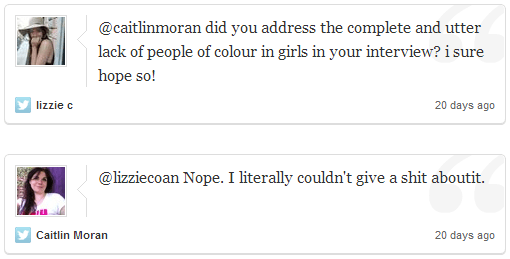 And there it is. Intersectionality? She doesn’t give a shit about it.