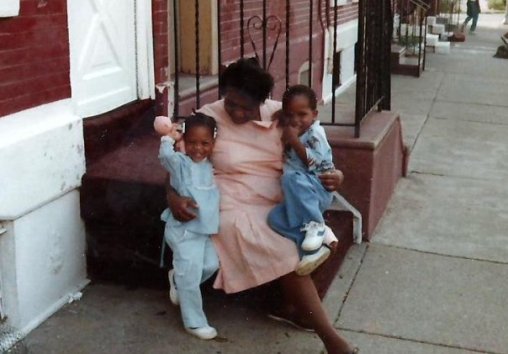 Over at The Root, Byron Hurt has a candid piece about how watching the fraught interaction between his parents as a kid helped plant the seeds for his adult embrace of feminism:

Feminist writings about patriarchy, racism, capitalism and structural sexism resonated with me because I had witnessed firsthand the kind of male dominance they challenged. I saw it as a child in my home and perpetuated it as an adult. Their analysis of male culture and male behavior helped me put my father’s patriarchy into a much larger social context, and also helped me understand myself better.

You’ll have to forgive me for how jumbled/discursive/TMI this is going to read, but this has agitated a lot of stuff I’ve been thinking about and was frankly saving for a much neater Mother’s Day post.

My own, very flawed feminism is also rooted in my childhood, albeit in circumstances very different from Hurt’s. His father’s presence was inescapable. Mine was imperceptible.

And I wasn’t an outlier: there just weren’t a lot of fathers doing the quotidian work of parenting in my South Philadelphia neighborhood, as if all the adult black men had agreed to go into hiding. And so the teachers; the parents who yelled at us to come inside when it got dark, and who organized the church trips, camps and block parties, were almost always black women. My grandmother scooped me up from soccer practice. My mom taught me the rules of football and tied my ties. My aunt helped me with my long division. Her daughter taught me how to shoot free throws. When something broke, one of these women fixed it.

None of these were feminist acts in and of themselves, and those women would never have identified as feminists, but they were (and remain) giants to me. And I was living in a world, albeit not the one they probably would have preferred, in which the traditional gender roles were queered. My world was largely populated by black women who were fantastically smarter and more competent than I was. That didn’t forestall my fantastically awkward attempts to slide into some ill-fitting molds of masculinity, and I still bought into all those gendered hierarchies even though they were especially abstract for me. But all of this hobbled my capacity to see the eventual assumption of gender roles as foregone or necessary conclusions, and stoked a lingering skepticism of the supposed truths on which they rested.

The theory — Patricia Hill Collins, Judith Butler, etc. — would all come later, in college.  But the ground was already fertile.  Ta-Nehisi Coates wrote about the roving packs of young dudes in B-more who dumped on other young dudes, with no real pretext. So it was where I grew up, where those cats felt less like my contemporaries and more like a capricious force of nature. (I’ve said before that the reason folks at my high school tried hard not to get detention wasn’t because they were well-behaved kids, but because detention meant walking the five North Philly blocks to the subway on your lonesome.) You learned to  look over your shoulder, to take the long way to wherever you were going. And if you got caught out there — and most of us did, at some point — that was your fault. You were slipping, actin’ like it can’t happen.

I remember my mom cautioned both my twin sister and me as teenagers to be on point, but there was a different shading to the warnings she gave my sister. They were: Don’t leave your drink unattended. Make sure your girls know where you are. My sister, it was assumed, was going to have someone say some slick shit to her, to hop in her personal space, to put their hands on her as she passed. The company of a friend wasn’t going to stop it. Nothing was. She was going to bear the responsibility for these transgressions when they inevitably happened. Others would have said my sister wasn’t cautious enough, or asked her what she was wearing, or why she was where she was. The response would always be to ascertain what she did wrong, how she should have known better, how she got caught slipping.

Our experiences were subtly, profoundly different, but they were mundane, and their ordinariness belied their injustice. To grow up like this meant developing a certain resignation about the specter of violence, and often — perversely — feeling personally responsible when something ugly happened. But I didn’t have a way to think about these things until I learned about feminism. The first time I heard the term “sexual terrorism,” then,  I finally had a name to something I’d always fundamentally known. The great irony was that I was having these realizations and entertaining these conversations for the first time on a suburban college campus where I actually felt completely safe.

But this wider berth still didn’t extend to my female friends. One summer while I was on campus, a friend of mine called me after she went to a bar with her sorority sisters and woke up the next day in a bare bed in an empty dorm room with no idea how she got there. What followed next — the police report, the rape kit, the feeling that her friends abandoned her, and their accusations that she should have been more careful about her drinking — was all horrifying, and I knew I’d never even have to consider or live through anything like it. This world was happening all around me in plain sight, and I was incapable of  perceiving it even as I was undoubtedly abetting it.

There were plenty of other moments. It took years before one of my dearest friends, my ace, could tell me he was gay. I found out accidentally through a mutual female friend. There was a long stretch — several years — when he and I didn’t talk about it, when I knew and he didn’t know I knew. As tight as he and I were, I was a heterosexual dude, and he had ample reason to worry about my rejecting him. When he finally told me, it was anticlimactic and we were both relieved. I jokingly chided him for not telling me sooner. But I thought about all the arguments we had about hip-hop and politics and basketball and women  — safe dude shit — and how we’d forged a deep, real supportive friendship in which he was still precluded from telling me about how he felt about the people he dated and loved; he’d helped me tread water during some pretty rough times and yet I didn’t feel comfortable telling him that I loved him for it. Because he was a dude. Clearly, we were doing this all wrong.

Although I do it, I still don’t feel totally comfortable calling myself a feminist, both because it has the feel of appropriation and because I am a deeply imperfect vessel. I am routinely very, very dumb about this shit as a  heterosexual dude — with all the tunnel vision and privilege that attends that location. The relationship those realities have to my blackness is a muddled one; sometimes they’re independent, sometimes they act in concert. But if growing up black and poor and male provided an unlikely bridge to anti-sexist thinking, so has feminism complicated the way I think about blackness and class. The way I perform masculinity is wrapped in the way I understand blackness, and vice versa. Their parameters are constantly evolving in my head, which means constantly reconsidering the way I orient myself to the world. This is rarely comfortable stuff. But it shouldn’t be.