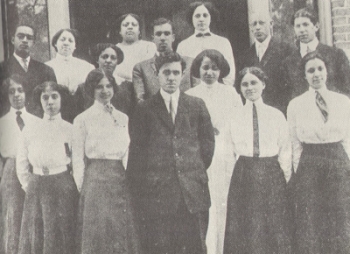 In a post about some dope-looking charts made by W.E.B. Dubois for the 1900 Exposition Universelle in Paris on the state of black life in America at the time, Adam offers up this aside:

But you can get a hint from this of the days when teachers at black schools were among the best in the country — Jim Crow was funneling the most educated black minds into a very limited set of professions.

This is a point that I find myself making a lot, especially during those nostalgic, rose-colored conversations about black collectivism and the strength of HBCUs in the Jim Crow era — and how integration subsequently eroded both. During Jim Crow,  the best career option for ambitious Negroes was  to attend  “normal” schools — or what we still sometimes refer to as teachers colleges — or blacks-only colleges that groomed them for the ministry.   Many of those normal schools are still around, albeit in different forms (Florida A&M and Hampton University began their lives this way). There’s a paradox here:  those barriers to professional opportunity were bad for any individual kid’s career prospects — to say nothing of being a fetter on the creation and diversification of black economic wealth — but were great for the prestige of teaching and for black colleges.

There’s a propensity to link the general condition of black Americans in general with the current robustness of  black institutions, even as those things have often been at historical odds.