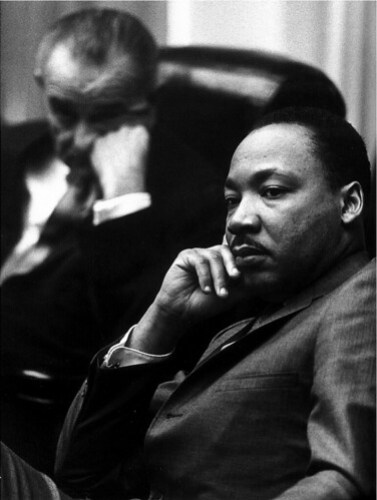 In what’s become something of  a yearly tradition here at PB, we’re re-running this fantastic post by Friend of the Blog Ari Kelman, a history professor in California who blogs over at Edge of The American West. Kelman looks at the sterilization of King’s image, who was never the saintly, beloved man in life that he has become in death.

The Martin Luther King of American memory serves this nation as the safe Civil Rights leader. When shrunk to fit within the confines of soundbite history, the pages of a textbook, or the scenes of a primary school pageant, King is cleansed of anger, of ego, of sexuality, and even, perhaps, of some of his humanity.

Counterpoised against the ostensibly violent Malcolm X, who supposedly would have forced America to change its ways by using “any means necessary,” King comes off as a cuddly moderate — a figure who loved everyone, enemies included, even whites who subjugated black people. Although there’s some truth lurking behind this myth, there was more (about both X and King) to the story: complexities and nuances that escape most popular recollections. Martin Luther King, no matter how people remember him now, was not nearly so safe as most of us believe.

On March 12, 1968, less than a month before he was shot and killed in Memphis, Tennessee, King visited the wealthy Detroit suburb of Grosse Pointe. Largely white, Grosse Pointe was — and to some extent still is — a bastion of establishment power. By that point in his career, King had embraced issues that moved well beyond the struggle against de jure segregation in the South. He had begun focusing most of his energy on inequality nationwide — de facto issues of poverty, job discrimination, fair housing, and, as Matthew Yglesias notes, the Vietnam war.

While in Grosse Pointe, King delivered a speech, “The Other America,”* which details the orator’s evolution over the course of his too-brief career:

Now let me say that the struggle for Civil Rights and the struggle to make these two Americas one America, is much more difficult today than it was five or ten years ago. For about a decade…we’ve struggled all across the South…to get rid of legal, overt segregation and all of the humiliation that surrounded that system of segregation. In a sense this was a struggle for decency; we could not go to a lunch counter in so many instances and get a hamburger or a cup of coffee. We could not make use of public accommodations. Public transportation was segregated, and often we had to sit in the back and…stand over empty seats because sections were reserved for whites only. We did not have the right to vote in so many areas of the South. And the struggle was to deal with these problems.

That’s the story most Americans know: from the buses of Montgomery to the lunch counters of Greensboro to a jail cell in Birmingham to the March on Washington and maybe to Stockholm and then Selma. But more likely straight from giving the “I Have a Dream” speech in DC to Memphis, to murder, to martyrdom.

This narrative skips over a number of chapters from late in King’s life, the period after he began organizing in the North, when success often proved elusive.

As King noted in Grosse Pointe:

These problems transcended any single region of the country:

It may well be that shouts of Black Power and riots in Watts and the Harlems and the other areas, are the consequences of the white backlash rather than the cause of them. What it is necessary to see is that there has never been a single solid monistic determined commitment on the part of the vast majority of white Americans on the whole question of Civil Rights and on the whole question of racial equality. This is something that truth impels all men of good will to admit.

And while those intractable issues had begun testing King’s otherworldly patience, he remained steadfast in advocating non-violence:

I’m still convinced that nonviolence is the most potent weapon available to oppressed people in their struggle for freedom and justice. I feel that violence will only create more social problems than they will solve. That in a real sense it is impractical for the Negro to even think of mounting a violent revolution in the United States. So I will continue to condemn riots, and continue to say to my brothers and sisters that this is not the way. And continue to affirm that there is another way.

By this time in his life, though, King openly expressed sympathy for those who embraced other means, for those who would not turn the other cheek:

But at the same time, it is as necessary for me to be as vigorous in condemning the conditions which cause persons to feel that they must engage in riotous activities as it is for me to condemn riots. I think America must see that riots do not develop out of thin air. Certain conditions continue to exist in our society which must be condemned as vigorously as we condemn riots. But in the final analysis, a riot is the language of the unheard.

“A riot is the language of the unheard.” That’s wonderful writing. But also: that’s not the MLK my son learned about in kindergarten last week or the MLK my students learn about in their textbooks. By contrast, the MLK who spoke in Grosse Pointe laid the blame for urban insurrections at the feet of complacent whites:

King offered his audience a range of solutions to the problems he outlined above: “a guaranteed minimum income for all people, and for all families of our country”; an immediate end to the war that was “allowing the Great Society to be shot down on the battlefields of Vietnam every day”; eradication of poverty throughout the nation; and real integration, extending beyond public accomodations to the corridors of power (“Integration must be seen also in political terms where there is shared power, where black men and white men share power together to build a new and a great nation.”**). King explained that, “In a real sense, we’re all caught in an inescapable network of mutuality, tied in a single garment of destiny.” Again: good writing. But more than that: none of the above is moderate, none of it is safe.

On April 8, 1968, less than a week after James Earl Ray shot and killed King, John Conyers, then as now the congressional representative for much of Detroit and its northwest suburbs, sponsored legislation making King’s birthday a federal holiday.Conyers had hosted King during the latter’s visit to Grosse Pointe.

Because of King’s longtime support for organized labor, Conyers originally turned to unions to back his bill. And for years, in the face of bitter antagonism, workers made the King holiday part of their contract negotiations. Unions helped revive Conyers’s bill after it died in committee; through the 1970s, they kept the idea alive.

As time passed, though, Conyers found champions in the corporate community: especially Miller Brewing and Atlanta-based CocaCola. Finally, with help from Stevie Wonder and the largest petition drive in the nation’s history, the bill, despite opposition from Senator Jesse Helms, who falsely charged that King had close ties to the American Communist Party, overwhelmingly passed both houses of Congress. President Reagan, facing a veto-proof majority, signed the law in 1983.

From there, several states either flatly refused to comply with the new law or skirted it by marrying the King holiday to other celebrations. In Virginia, for example, Martin Luther King Day became known as Lee-Jackson-King Day, an ungainly and unlikely civil union of Confederate generals and a Civil Rights activist. Arizona, most infamously, only began celebrating the King holiday after  the NFL threatened not to hold the Super Bowl there. Facing the potential loss of revenue, Arizona toed the line.

I wonder what Martin Luther King would think of his eponymous day. Of the MLK lesson plan — long on heroism, patriotism, and feel-good rhetoric but short on violence, non- or otherwise — in my son’s classroom. Of the fact that his holiday’s roots in organized labor have been completely forgotten. Of the painful irony that corporate sponsorship proved key in passing the law marking his birthday.

More than that, I wonder what those sponsors would think if they were transported back to Grosse Pointe, on March 12, 1968, to hear King deliver his “Other America” speech, including the line, “a riot is the language of the unheard.” I suspect they wouldn’t recognize that Dr. King. I wonder how many of us would.

* I believe that this is a slightly modified version of the same speech, given, in this case, roughly a year earlier at the Leland Stanford Junior University.

** I’m leaving the obvious gender issues alone. Much to my discredit, I know, but this post is already way too long. And I’ve got other work to do tonight.