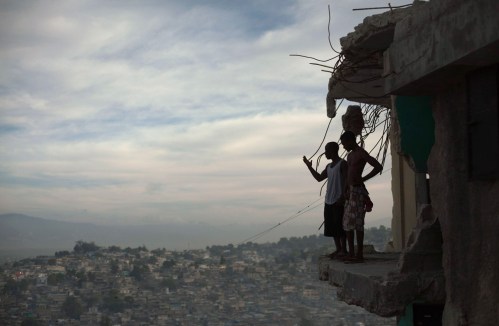 via The Big Picture.

Today marks the one year anniversary of the devastating earthquake in Haiti. Conservative estimates put the number of dead around 92,000 — more than three percent of Haiti’s entire population. Though luminaries like Bill Clinton have hoped that Haiti, the poorest nation in the Western Hemisphere, could “build back better,” poor coordination and the still-unresolved national elections have hampered much of the rebuilding effort.

Joel Dreyfuss, the managing editor of The Root, is a native of Haiti, and wonders if things have actually gotten worse in the last year.

After a year, just 5 percent of the rubble from the powerful 7.3 earthquake has been cleared; less than 10 percent of the $5.3 billion pledged after the quake has been disbursed. Thousands of NGOs (nongovernmental organizations), from the massive Red Cross to tiny volunteer religious groups, are on the ground.

No doubt, many of the NGOs saved lives and provided badly needed care. But their efforts are uncoordinated and often at cross-purposes with government policies. For example, the flood of volunteer doctors providing free emergency care has forced several Haitian hospitals into bankruptcy, weakening an already fragile medical ecosystem. Camps run by charitable organizations or celebrities like Sean Penn have discouraged some Haitians from leaving the overcrowded capital or returning to habitable homes.

Haitians have taken to calling their country “the nation of NGOs” and begun to wonder if foreign aid is bad for them in the long term. It’s an important question: Thousands of organizations, many of them well-meaning, have toiled in Haiti in recent decades; they have made little discernible difference in the lives of most Haitians.

While there’s a surfeit of aid groups on the ground, much of the monetary commitment to Haiti’s reconstruction has yet to surface.

The U.S. government, for one, has pledged $1.15 billion to reconstruction. Mother Jones reported that though the government has spent more than a billion on emergency aid for Haiti, only $120 million of the funding it pledged for reconstruction has arrived.

Many large U.S. corporations also pledged funds to Haiti after the quake. While some of that money has been sent, a few companies haven’t yet made good on their promises. Here’s Mother Jones’ tally from last week:

GE has sent the $5.6 million it promised. Google has delivered the $1 million it pledged, Citi has sent $1.5 million out of $2 million and says the rest is on the way, and Wal-Mart committed $500,000—but then forked over $1.5 million, plus food and blankets.

Edwidge Danticat, whose novels and memoirs center on the experiences of Haitian emigres, writes that  the recent cholera epidemic there has become a crisis of spiritual dimension.

In the year since the earthquake, Haiti has lost some thirty-five hundred people to cholera, an epidemic that is born out of water. The epidemic could potentially take more lives than the earthquake itself. And with the contagion of cholera comes a stigma that follows one even in death. People cannot touch a loved one who has died of cholera. No ritual bath is possible, no last dressing of the body. There are only more mass graves.

In the emerging lore and reality of cholera, water, this fragile veil between life and death for so many Haitians, has become a feared poison. Even as the election stalemate lingers, the rice farmers in Haiti’s Artibonite Valley—the country’s breadbasket—are refusing to step into the bacteria-infected waters of their paddies, setting the stage for potential food shortages and more possible death ahead, this time from hunger. In the precarious dance for survival, in which we long to honor the dead while still harboring the fear of joining them, will our rivers and streams even be trusted to shelter and then return souls?

Some Haitian-American groups are calling on the Obama administration to waive in 55,000 Haitians who were approved for visas before the quake hit. (The U.S. has a cap on the number of visas granted to any country each year, so getting approved for a visa and actually getting one can take up to ten years.)

The argument is based on more than compassion: Haitians abroad already send more than $1 billion back home each year, about a sixth of the gross domestic product for the hemisphere’s most impoverished nation.

…
Allowing the 55,000 Haitians to jump the visa line could suddenly burden the infrastructure and environment for a population that has grown rapidly in the last 10 years because of immigration, both legal and illegal, said David North, a fellow at the Center for Immigration Studies.

And there’s no guarantee that they wouldn’t create a void when they left, he said.

“These 55,000 are probably above average in income, education and luck. They’re not a cross-section of Haitian society — they’re probably already considerably better off than the average Haitian,” North said.

“If those people come from Haiti, the money that had previously come to them from the United States will just stop coming, and that’s hard on Haiti.”

Also, please check out “Island Time,” the fantastic This American Life episode on why Haiti, despite all the well-intentioned aid and volunteers that have poured in over the decades, has continued to struggle.