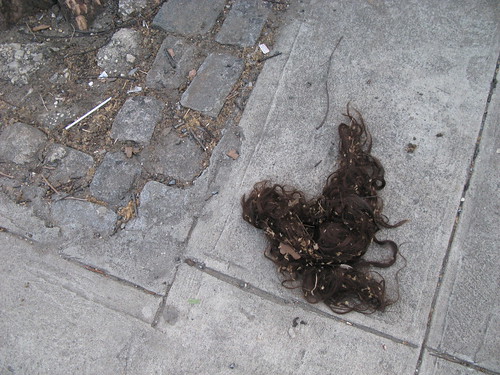 Balloon Juice points to ellaesther, who finally got a chance to peep Chris Rock‘s documentary Good Hair, and left the experience pretty disheartened.

It was like watching beautiful women talk about their lifetime of dieting, their tricks for dressing to look thinner, their methods for cutting calories during the holidays, smiling broadly over their successes and also kind of (a little bit) laughing at themselves for the obsession, while yet maintaining and feeding the obsession. Like watching mothers tell their little girls not to eat, that they won’t get what they want if they allow their bodies to be something other than slim, while at the same time hearing their men complain about not being able to just eat a damn dessert now and then.

Both sides feeding into a self-destructive, self-denying, self-loathing system that neither side fully recognizes but which each side plays a part in perpetuating. The women serving as their own police force — as any oppressed society does — leaving the men to be baffled by something that ultimately serves their needs and their position of (relative) power.

This seemed to be the reaction that Rock was nudging the audience toward, even as he seemed to assiduously avoid taking an explicit stance. We watch as a principal ingredient in hair relaxer eats through a metal can, before cutting to a little girl of about three or four who has already started getting her hair permed — the opening night audience in Brooklyn gasped loudly and tut-tutted at this — before seeing how the hair used to make expensive weaves sold stateside is literally shorn from the heads of poor people in South Asia as part of a religious ritual. (Some of the charges leveled against weave-wearers seemed gratuitous, like when Al Sharpton says that some people go into debt to finance their weaves, as if that’s not true for some percentage of folks looking to purchase any expensive consumer good.) “I want [my daughter] to know it doesn’t matter what’s on her head,” he says at the film’s close, “but what’s in it.”* It’s a frustrating cop-out, as he spends two hours outlining exactly why what his daughter wears atop her head matters a whole lot, and to a whole lot of people in a whole lot of complicated ways.

Hair also oddly doesn’t spend much time on women who eschew all that stuff and decide to go natural. There’s a scene in which a group of high school students are talking about hair, and the one sporting a fro comes in for some criticism. Her hair, the others think, might hurt her career prospects by hindering folks’ capacities to take her see her as professional. But if you’ll allow me a completely irresponsible generalization, I’d guess that college-educated, professional women are way, way more likely to have natural hair than women who are not. (Say it with me: social location matters.) I’m not sure what the purpose of that scene was, other than to show us the discomfort some people have with natural hair, but since that sentiment was being voiced by teenagers — not exactly a cohort known for its foresight and its embrace of difference — their observations about The Way The World Works probably aren’t really that useful. That seems all the more reason to have more women who went natural represented in some way.

Aside: the hair show stuff that was spliced throughout could have been a standalone documentary by itself. I found the whole subculture of that fascinating.

*Not the direct quote, but close enough.