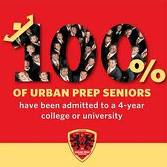 Earlier this year, the success of Urban Prep Academy, an all-black, all-male charter school near Chicago, was the subject of rapturous praise for sending all of its graduating seniors to four-year colleges.

It makes sense that this story has gotten a lot of positive press; it’s a respite from the parade of depressing-ass statistics we hear about the condition of black men in America. And it’s another P.R. coup for the charter school movement, which has done a good job playing up the successes of top-performing schools, while downplaying the less-than-stellar performance of  the overwhelming majority of charters.

But there are other numbers at Urban Prep, whose young mentors received a flattering write-up in the Wall Street Journal, that are  worth considering.

At the group’s first campus in gang-infested Englewood, 80% of the 150 incoming freshman read at a sixth-grade level or below. Four years later in 2010, 107 graduated from the school and all were accepted to four-year colleges. Three of the other students were expelled and the rest transferred out of Urban Prep, school officials said.

That means that UP’s graduation rate for the Class of 2010 is about 71 percent — still  significantly higher than the miserable 44 percent graduation rate for black boys in Chicago — but it shades the topline college acceptance numbers in a very different way.

And this is if you use the school’s numbers; the Illinois Interactive Report Card said there 166 freshman at UP in 2007, which would drag their graduation rate down to 64 percent. And that ‘transferred out’ number is the kind of thing that raises a lot of eyebrows in education circles:  the kids who leave are usually the weakest performing students and are encouraged to leave. Any school’s college  numbers will look much better when you’ve effectively weeded out the entire bottom-third of a given class. Public schools have different rules of reporting, and can’t fudge their numbers this way.

It’s also worth noting that per IIRC, only 17 percent of UP’s students “met or exceeded” state standards on math and reading tests, which means the school’s seniors are going to need serious remediation on the college level, or they’re going to be extremely unlikely to graduate. That’s not a knock against the hard work of these kids, who deserve every chance to make it. But this reading of the school’s success — and well-meaning arguments that its model should be replicated — leaves out some really important caveats.