Home » Browse PostBourgie » The Threat to Programs for Poor Families.

The Threat to Programs for Poor Families. 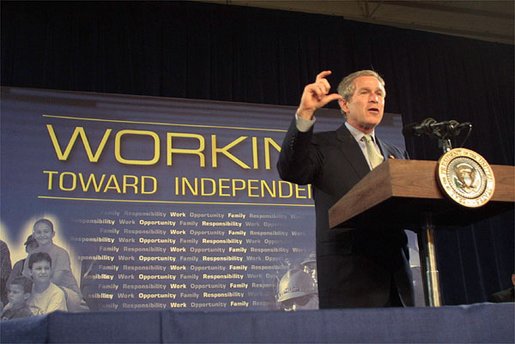 Liberals have always had a hard time dealing with fatherhood and family programs designed for low-income families. On the one hand, some of the arguments behind the creation of programs for low-income families that demonstrate healthy relationships and encourage fathers to be emotionally involved in their children’s lives is a good thing on its face: promoting the idea that fathers are important beyond the child support they can provide is as good for a women’s rights and progressive agenda as anything else. But on the other hand, these programs have always provided a Trojan horse for conservatives who want to promote marriage and traditional gender roles, as President Bush did during his administration. Bush used a decade-old push to better enforce child support —- and provide fathers the social services they needed to be able to pay it in order — t0 moralize on marriage and funnel funding to church-based programs he approved of.

But in President Obama, progressive groups found a president who could include such programs under a broad anti-poverty umbrella in a way that makes sense, as I wrote about last week over at the Prospect. Obama’s rhetoric shows he supports fatherhood programs without moralizing on marriage, and his policy goals include the kind of practical support that progressives can get behind:

However, for many women’s rights groups, there is a fine line between programs that provide social services to fathers and those that promote conservative, marriage-based solutions. Bush-administration-era fatherhood and marriage programs denigrate single motherhood, because they seem to say women are inadequate parents. Moreover, there are finite resources for low-income families, and fatherhood-focused programs risk robbing low-income women and children of welfare services, which are already inadequately funded.

Until recently, progressive groups that promote fatherhood initiatives have co-existed in an uneasy peace with women’s rights groups. But the two have found common ground. “If we’re looking at low-income families, those families do include men,” Jacquelyn Boggess, co-director of the Center for Family Policy and Practice, said at an October event sponsored by the Center for American Progress aimed at bridging the gap between anti-poverty advocates and women’s rights groups. “They may not show up on documents or papers or forms, or in houses … but they do exist; they’re part of families. And there are ways that we need to support them being part of families, and encourage it.”

The problem with this bill, as with many of the past two years and many more going forward, is how much damage conservatives can do to and with it. That’s why some groups are hesitant to reopen big progressive policy agenda items, like the Childhood Nutrition Act, TANF, and many more than promote government spending; anti-government rhetoric from the right risks ruining those programs, and so the best option just might be to let them coast ahead as is, even if their current state is not ideal.