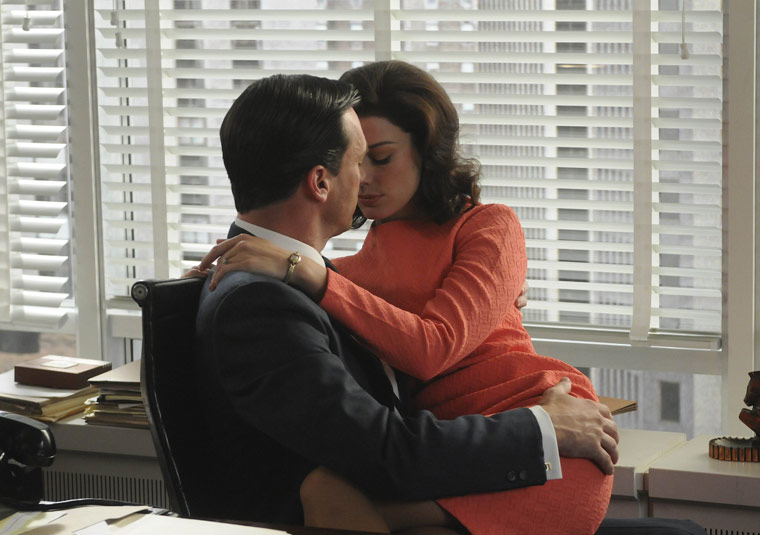 I’m a little late to the party on this, but it’s been many o’ year since I had a TV and longer still since I’ve paid for cable. Normally, I don’t mind waiting a day, but my twitter timeline was full of Mad Men finale spoilers this morning. In this case, I expected some ridiculously weird meltdown, a Through the Looking Glass unwinding of the Mad Men world and everything we knew about it. All morning long, the general response was summed up by three little letters — WTF! — and G.D. said there was one scene that felt like a dream sequence. I successfully avoided all of the roundups and recaps, but I’m writing this quickly to see what others think.

Was I the only one who wasn’t surprised? I didn’t necessarily expect Don to propose to Megan, but I did expect Faye to eventually lose out to some beguiling and beautiful brunette, and we’ve known Megan was the most likely candidate for awhile. This is also, incidentally, parallel to what happened with Roger and Jane a few seasons ago. The show wants us to believe that Faye was too much for Don, and that he needed her while his life was stormy. But, now that he’s more in control, he wants to be in control, attached to a cipher on whom he can project whatever he wants women to be at the moment. He’s imagined Megan’s stated ambitions in the advertising field are serious, and now Joan and Peggy are horrified of a future of her as a copywriter. It’s not that I think so lowly of men, either; it’s that television does.

But now that we’ve discussed the most important thing, regular recape time: All of this happens with Megan because Betty unexpectedly fires Carla. Glenn, the creepy neighbor boy, comes over to tell Sally, who’s packing up for the move, goodbye. Carla sees no harm in letting him sneak up, but Betty comes home and sees him. Since it’s plainly obvious that Betty’s jealous of Glenn’s attentions to Sally, she fires Carla on the spot and doesn’t give her a letter of reference. This pisses off Henry Francis and Don, who has to scramble to find childcare on the trip. Megan has a hard time finding someone who can watch all three kids, and he spontaneously decides to double her salary for the week and pay all her expenses. Megan teaches them French songs and takes them swimming, Don’s impressed, they sleep together, and Don spontaneously gives her the engagement ring the real Don Draper had given Anna.

Meanwhile, Ken Cosgrove and Peggy finally sign a new company, which gives us some hope that Sterling Cooper Draper Price will be around when the show comes back in a year. It’s the mildness with which this huge success is met that pisses Peggy off the most; she might have just done the biggest thing to save the company that anyone’s done since Lucky Strike left, but everyone’s all gaga over Don and Megan. She and Joan bond, and Joan, meanwhile, is still pregnant, about which I’m totally not surprised either.

At the end of the show, we see Don lying in bed with Megan, staring worryingly at the ceiling. When the fifth season opens, I’m sure will see them in a big house in an Ossining-like suburb. Joan’s husband is going to die or be seriously wounded, leaving her to care for Roger’s baby all on her own. Peggy will be in an elevated power position vis-a-vis Don, who’ll start a Roger-like tumble again after he realizes his newfound domestic bliss isn’t much better than the last one. Or at least, that’s what I think. Thoughts?

Also, what’s with Megan’s teeth? I don’t get it.