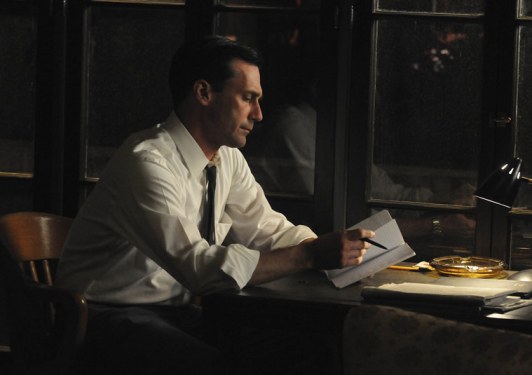 After all of the drama that exploded last week, “Mad Men” fans had to be wondering which direction the show would take in this week’s episode. What we got was Introspective Don, who has decided to put down the booze and pick up the pen. The opening scene had him narrating his thoughts as he jotted them down in his journal, using the laziest narrative technique ever: the voiceover. Ugh.

Thankfully, the episode picked up enough for that transgression to be (mostly) forgiven. Picking up where last week’s suitcase metaphor left off, this week seemed to be about getting rid of excess baggage (or boxes, as the case may be) and moving forward. With a renewed effort to experience life, Don begins swimming. He is more perceptive about life’s details, like the pleasant feeling of being able to stretch out alone on his bed, and the smell of corn in the air as he walks outside.

Regarding Don’s personal life, we see the return of Bethany Van Nuys, a.k.a. Betty 2.0; their resemblance is uncanny. Their date is momentarily interrupted by the unexpected presence of Betty and Henry Francis. “Her?” Bethany incredulously asks, when Don tells her that Betty is his ex-wife. It’s not exactly evident why Bethany is so shocked about Betty. Was she aware of her resemblance to Betty? Did Betty’s pouting and non-stop smoking put Bethany off?

Although Bethany and Don are able to continue having a good time throughout their dinner (and in the cab ride after), Betty has a hard time letting go. “I hate him,” she sullenly says on the car ride home. “Hate is a strong word,” Henry responds. “I hate Nazis. I don’t hate my ex-wife.” Betty has always had a childish approach to the way she handles her problems, and this encounter with Don was no exception. “Before you, he was the only man I was ever with,” she tells her husband. She is having a hard time letting go of the past, and her behavior is having a negative effect on her marriage to Henry, who must keep urging her to move on. “I misbehaved,” Betty later admits to Francine, who tells her to be careful because, “Don has nothing to lose and you have everything.”

Back at the office, Joan is fighting an entirely different battle: sexual harassment. After reprimanding a group of her male co-workers over the noise they were making trying to get an item out of the new vending machine, Joan becomes the target of Joey’s harassment. First he tells her that she looks like, “some madam from a Shanghai whorehouse,” claiming that she walks around looking like she wants to get raped. It is a particular sting to Joan, considering her past experience being raped by her then-fiancé.

After being confronted by Peggy, Joey continues the “she asked for it” meme, saying that Joan wears her pen on a chain around her next so that men would “stare at her tits.” Ignoring Peggy’s advice to stop harassing Joan, Joey decides to turn it up a notch, drawing a vulgar caricature of Joan and Lane. Joan sees the caricature and confronts Joey and his cohort, icily telling them, “I can’t wait until next year when all of you are in Vietnam…Remember, you’re not dying for me, because I never liked you.”

Peggy takes the caricature to Don, hoping he would yell at Joey, but Don tells her to take care of the problem herself, lest she want to gain the title of Office Tattletale. She confronts Joey in her office, telling him to go apologize to Joan. When he counters that the reason he hated working with women was due to their lack of a “sense of humor,” Peggy fires him. Joey’s buddies are shocked that he’s fired; Harry tells Joey to give him a call later so they could grab a drink, while Stan mutters something about Peggy “advancing the science of wet blanketry.”

At the end of the day, Peggy gets into the elevator with Joan, asking her if she’d heard about Joey getting fired. Peggy, expecting a grateful acknowledgment or some type of woman-to-woman commiseration, is shocked when Joan instead reprimands her. “All you’ve done is proved to them that I’m a meaningless secretary, and you’re another humorless bitch,” Joan tells her. Though Joan is probably right, her own indirect method of dealing with the harassment wouldn’t have garnered a much better result: the only “lesson” Joey and his friends were receiving was that they could get away with whatever they wanted.

Towards the end of the episode Don goes on another date, this time with Faye. It is reminiscent of his earlier date with Bethany, only this time, the woman sitting across from him is his age, and he refuses to repeat his previous patterns. Their dinner conversation is more intimate and revealing than the coy banter he had with Bethany. On the cab ride home, Don also takes a different route: he kisses Faye, but rather than take her back to his apartment, he makes it clear that walking her to her front door is as far as he can go at the moment.

At the end of the episode, Don shows up at baby Gene’s birthday party. “What is he doing here,” Henry asks her. “It’s okay,” Betty responds, picking up Gene and walking over to hand him to Don. She returns to Henry, the vision of a content housewife. “We have everything,” she firmly states, repeating Francine’s earlier line. But as she watches Don playing with Gene, her self-righteous façade slowly begins to fade. Betty hasn’t had any meaty episodes in a while; she’s always acting childish, and this episode gave her more to work with.