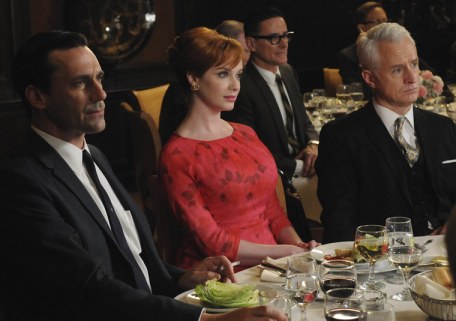 Mad Men episode with Don and company at the CLIO awards airing the same night the Emmys?  Thanks for the synchronicity, AMC!

We open with Don and Peggy interviewing Danny Siegel, who can barely get through a sentence without mentioning Roger’s name. Most of the pitches are variations on the same idea: “_____: the cure for the common chair” or “______: the cure for the common bank.” After all but laughing Danny out of the office, Peggy complains to Don about the new art director Stan Rizzo.  Don doesn’t want to hear it. “He’s talented and more experienced.  Learn to work with him.”  Don goes to Roger, thinking the interview with Danny was a joke, and learns that Danny is Jane’s cousin, and essentially hiring him is cheaper than Roger’s “personal gift expenditures” to Jane.  (As an aside, what happened to Jane?  Her interactions with Joan, both before and after she married Roger, were priceless.  And I think she’s actually a worse person than Betty.) Don and Roger’s meeting also starts a series of flashbacks, where we learn how Don was hired — Don sold a mink stole (for Joan) to Roger, and when Roger remarked on the fur salon’s ads, Don mentioned he did them.  He included his portfolio in with the stole and more or less hounded Roger until Roger got drunk at lunch one day and hired him.  This same situation plays out with Don and Danny over the course of the episode.

Meanwhile, Peggy is sulking around the office, irritated at having to work with Stan, and upset that Don accepted congratulations on the Clio nomination from everyone but her, on a campaign she worked on no less.  At the awards show, while the nominees are announced, and with Joan tightly clasping Roger and Don’s hands under the table, SCDP’s Glo-Coat ad wins.  The celebration is interrupted by news that a potential client, Life Cereal, is at the office.  Don drunkenly offers his pitch, and when the cereal men don’t like it, begin spouting taglines, until he eventually lands at “the cure for the common breakfast,” which the Life people love.  Peggy tries to intervene, since Don stole the idea from Danny, but Don orders his secretary to book Peggy and Stan a room for the weekend, so they can work on the Vick’s campaign.  Don heads out to a bar to celebrate his win, and works his way through every woman he encounters until he finds someone to take home.

While in the hotel room Stan goes on and on about how he’d be a nudist and stares at a copy of Playboy, making fun of Peggy and telling her she is ashamed of her body, or “ought to be”.   Fed up, Peggy calls him out, saying he is lazy and has no ideas.  She stands up, starts stripping, and says “I can get liberated.”  Stan strips as well, and Peggy begins tossing out ideas for the Vicks campaign.  Distracted, Stan eventually puts his clothes back on, calling Peggy ” the smuggest bitch in the world.”  Smiling, Peggy puts her bra back on and keeps working.

Don wakes up Sunday to a call from irate Betty, who has missed a brunch with Henry since Don wasn’t there to watch the kids.  Later, Peggy finds him to tell him he sold Danny’s stolen tagline to the cereal people.  Back in the office on Monday, he offers Danny money for the tagline.  Danny refuses, saying he doesn’t need money — he needs a job.  Don reluctantly hires Danny, instructing an incredulous Peggy to take him to Joan to get settled.  The episode closes with another flashback, to Don standing next to Roger in front of the elevator.

“Would you leave me alone?” Roger says.

“You hired me,” replies a surprised Don.

“You said ‘welcome aboard.'”