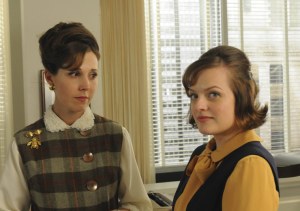 The story lines of rejection this week are two-fold. The first describes Pete Campbell’s inability to reject his father-in-law’s business, partly because he worked really hard to get the account and partly because his wife’s dad ruins her surprise that she’s pregnant. But that’s a minor hitch soon overcome, Pete uses it to leverage even more business from his father-in-law’s company.

The bigger story line, though, ties into what we already know about Pete and fatherhood: the child he had with Peggy, who put it up for adoption and kept it a secret. When Peggy told Pete about the baby, she acknowledged that she could have used it to snag him but decided, instead, that she wanted other things. In doing so, she rejected the idea that having a baby and snagging a husband was all she needed, and sorta rejected Pete. The fruits of that decision come to bear in this episode: Peggy’s part of the shifting New York scene that augers a new future, the one advertisers like Don Draper may struggle to survive in.

That new world is also hinted at in Peggy’s campaign for the new Pond’s cream, the client that is pushing Pete’s dad-in-law out. Peggy think that the idea of ritual self-indulgent will sell the cream; the old hats think it should be touted as a way to snag a husband. Unfortunately for Peggy, the focus group turns into a crying session in which the women polled talk about their cheating boyfriends. That gives Don’s secretary, the one he had through the zipper sex with a couple of episodes ago, a chance to cry, confront Don, and finally leave. The woman running the focus group thinks they should shift the campaign back to one concerned with snagging a man, but Don refuses to be part of that retro idea and argues that advertising has the ability to shape expectations.

Meanwhile, when Peggy finds out about Pete’s news, and is understandably having a hard time with it. The two have a moment, and it’s actually sort of nice, a respectful, quiet exchange between two characters who might share the only secret left in the small agency. I haven’t read the responses to the episode yet, since I wasn’t sure when I was going to have time to write this, but I’ve been concerned this seems, to some, as a sort of anti-feminist moment for Peggy who, this season, has admitted to more complicated relationships with the idea of men and relationships than she has before. I don’t think so, I think it was just a nice acknowledgement of what must be the kind of decision that is never easy for women to deal with treated in an adult way. Peggy doesn’t rend her clothes or becoming incapable of serving as a functional human being, the way conservative women would have us believe. She just reminded of what was a less-than-awesome moment in her life.

But the juxtaposition between an old and new way of thinking was what’s really in play here, and Don looked ready to jump ahead of the curve, after all.