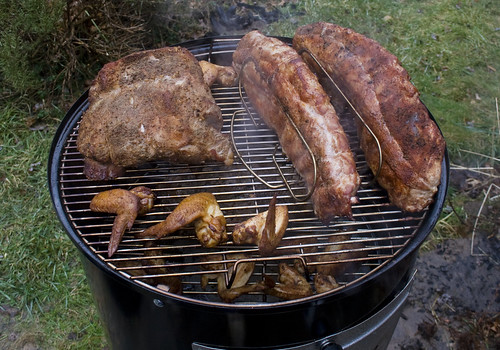 It’s summer, unofficially, which means months full of man-eating sharks, tabloid-y political scandals and missing white girls. But not quite yet. There’s plenty of stuff to gnaw on as you slide back into your desk chair, hopefully a few pounds heavier after some mean-ass barbecue, and daydream about being outside.

A few weeks ago, ExxonMobil suffered an oil spill in the Nigerian Delta that dwarfs the disastrous one on the Gulf of Mexico. The Nigeria disaster is the 16th worth spill in history,  in terms of tons of oil — 214,475,800 gallons and counting. But in Nigeria, where there is little oversight, oil spills are quite literally a near daily occurrence — they have about 300 a year. (G.D.)

As the Gulf disaster drags on, BP has lost billions of dollars as its share prices tumble. (G.D.)

The US Justice department is challenging Arizona’s  racist and problematic  anti-immigration law, but California, of course, beat them to the punch. (Monica0

Artur Davis‘s bid to become the first black governor of Alabama would’ve been a longshot even if he hadn’t circumvented the state’s old and influential civil rights organizations in his campaign. “But since he was elected to Congress in 2002, he has often been at odds with much of the state’s black political establishment. He never sought — or earned — their blessing to run for governor. And the civil rights organizations that have long carried influence over many black voters in the state have lined up behind Mr. Davis’s opponent, Ron Sparks, the state agriculture commissioner, who is white.”

The housing crisis has erased decades of gains in black wealth and income in Memphis. (Jamelle)

The right is freaking out over plans to build a Muslim cultural center a few blocks away from the former site of the World Trade Center, and one radio host said he hopes “somebody blows it up.” (G.D.)

Sarah Palin‘s new next-door neighbor, reporter and author Joe McGinniss, Jr., got a sweet deal on the Wasilla rental because the owner of the home wants her money from the Palins. (Blackink)

In a throwback to old KGB tactics, a handful of Russian opposition activists have been set up through a sophisticated “honey trap” operation. (Blackink)

A massive sinkhole opened up in the middle of Guatemala City after Tropical Storm Agatha. The pictures are unbelievable. (G.D.)

Maybe BPA, a prevalent chemical in all kinds of plastics, is dangerous after all. First was a really even-handed, considered piece from Jerome Groopman at the New Yorker, next was word from Marion Nestle at Food Politics that some lawmakers might be trying to guard against the possible risks. While the dangers of the exposure to such chemicals probably cause unnecessary scares, the harmful affects of that exposure usually fall disproportionately on those least able to deal with it or try to mitigate it: young children and lower-income families. It’s probably worth being cautious for that reason alone. (Monica)

Fenger Academy, the Chicago school attended by Derrion Albert, whose beating death last year was captured on video, has been designated for “turnaround” by the city. (G.D.

A recent Brandeis grad wonders whether her English degree was worth the $85,000 in debt she took on to finance it. (G.D.)

The Internet has decided it wants Donald Glover to be Peter Parker in the next Spider-Man movie. (Donde es el Daily Bugle?) (G.D.)

The renewal of the Lakers-Celtics’ championship rivalry is great for drama, bad for parity. (Blackink)