Home » Browse PostBourgie » Three Strikes/and You in It for Life/Mandatory. 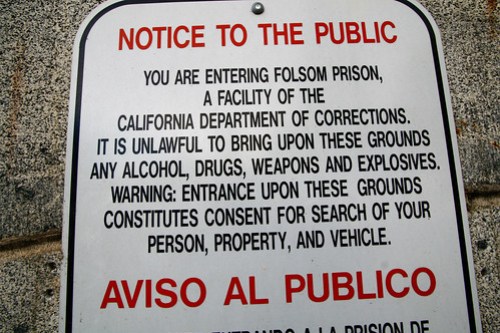 via theburied.life, via Creative Commons.

Earlier this week, the FBI reported that crime was down across the country last year despite the faltering economy and rising unemployment. Over at TAPPED, Adam Serwer has a post that does a good job explaining why the commonly held idea that prolonged downturns lead to spikes in crime is off base:

UCLA professor Mark Kleiman grumbles that reporters continue to write as though “crime naturally rises and falls with the unemployment rate. It doesn’t.” Indeed, as OMB head Peter Orszag explained last year, sometimes crime rises with recessions. And other times it doesn’t, particularly when it comes to homicide.

In his book, When Brute Force Fails, Kleiman explains that a number of historical and social factors combined to create the crime boom of the latter part of the 20th century, the biggest factor was demographics.

“People commit most of their crimes between the age of 15 and 30, and so periods of time when there are more people in that age range have more crimes,” Kleiman explains. “In addition, a particularly big birth cohort like the Boomers, and to some extent, the Echo Boomers, tend to have a higher individual per-person crime rate.”

In terms of policy, we’re still dealing with the fallout of some of our more recent recessions. Roiling anxieties over the economy and spikes in crime prompted politicians to position themselves as serious about law enforcement, and lawmakers to pass an array of politically popular if ineffective — and in some cases, borderline disastrous — laws ostensibly aimed at crime reduction.  During the early 90’s, around the time the Crack Age was starting to ebb, California instituted its “three-strikes” policy, mandating life sentences for any person convicted three times for “serious” crime. Emily Bazelon‘s piece in this week’s New York Times magazine lays out what actually happened: the state ended up locking up for life thousands of people who were convicted for things like purse-snatching and burglary.

Under California’s version of three strikes, first and second strikes must be either violent or serious. These include crimes like murder, attempted murder, rape, child molestation and armed robbery. But in California, “serious” is a term of art that can also include crimes like Norman Williams’s nonconfrontational burglaries. And after a second-strike conviction for such an offense, almost any infraction beyond jaywalking can trigger a third strike and the life sentence that goes with it. One of Romano’s clients was sentenced to life for stealing a dollar in change from the coin box of a parked car.

California’s repeat-offender law is unique in this stringency. Twenty-five other states have passed three-strikes laws, but only California punishes minor crimes with the penalty of a life sentence. About 3,700 prisoners in the state are serving life for a third strike that was neither violent nor serious, according to the legal definition. That’s more than 40 percent of the total third-strike population of about 8,500. Technically, these offenders are eligible for parole after 20 years, but at the moment, the state parole board rarely releases any prisoner early.

The explosion of its prison population has become a major fiscal albatross on the state, which is dealing with an array of other budget woes. And last year, federal judges ruled that the state’s prisons were so overcrowded that it amounted to a violation of its inmates’ constitutional rights and ordered the release of tens of thousands of prisoners. Given all this, you might think three-strikes would be easier to repeal. But despite its dubious merits, three-strikes remains enormously popular in California, and politicians, like Steve Cooley, a Republican running for attorney general who wants to moderate the law  (he doesn’t want three strikes rescinded outright, but he wants to take minor offenses off the list of things that automatically trigger it), face considerable political risks by running against the current policy. It’s way too easy — and pretty effective — for an opponent to paint an anti-three-strikes platform as “soft on crime.”

Three-strikes is yet another example of what happens when criminal justice policy is informed by momentary panics, like the Rockefeller drug laws, crack/cocaine sentencing disparities, or Megan’s law. The primary concern is with assuaging people’s fears, and there’s a lot less concern that those laws actually work.