Home » Browse PostBourgie » Blogging Lost: What They Died For.

Blogging Lost: What They Died For. 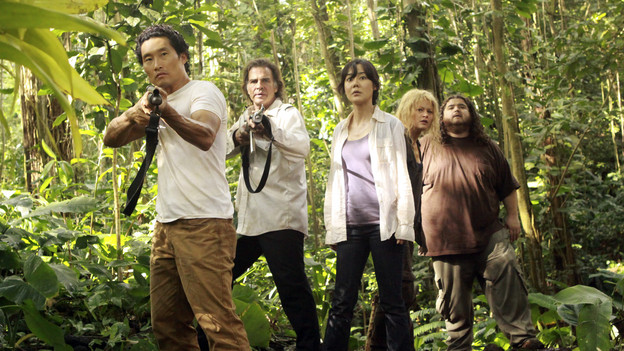 Before I get into the actual episode from this week, I just have to ask, who puts their milk in a pitcher? I couldn’t even concentrate on the first scene when parallel-world Jack, his son and Claire all had breakfast because on the breakfast table was a lovely glass pitcher full of more milk than they needed for their cereal. Who does this? The answer is no one, accept families on commercials.

Secondly, I have to confess that I didn’t watch last week’s episode. I don’t care that much for the Big Questions lost tries to answer (I’m more interested in the little things, like introducing a whole new cast of characters in the second season just so they can all get killed off.) When Allison Janney told the woman in labor that answers would just bring more questions, I rolled my eyes and moved on. That’s a little too real. Jacob the person is relatively new, and Jacob the concept could have gone mysteriously unexplained if they had done it right. For example, I don’t need to have it explicitly stated that the Smoke Monster needs to occupy dead bodies, but we got that this episode. I’d rather like it if threads that seemed critical in the beginning weren’t dismissed as uninteresting tidbits (I know the polar bears were introduced by the Dharma Initiative for experiments. But a better explanation of the Dharma Initiatives relevance to the narrative would be nice.) Before, the fight was over the Dharma Iniative and the Others, and then the Losties and the others, and now it’s between good and evil. How does that connect with the hatch, the numbers and the button? The Swan? The Looking Glass? And this new thing, the flame? But I’m getting ahead.

Back to the episode. From his milk-pitcher-domesticity, Jack goes to work to encounter Locke again, because Locke’s had another visit from Desmond. But not really Locke, Desmond beat up Ben in an effort to jog his “true” memory, and told him Desmond had been trying to save Locke. Off-island Ben, meanwhile, is invited over to dinner with Danielle, who’s made an appearance as Alex’s mom, and tells him he’s the closest thing to a dad Alex has ever had.

Things are also getting reuinion-y at the jail, where Miles and Sawyer have Kate, Sayid and now Desmond in lock up. Kate tries to sweet-talk Sawyer, but Desmond, who’s bringing everyone together, has already schemed to have Ana Lucia break them all out with Hurley’s money. Things always start to happen when Desmond’s around. But someone needs to tell him that his quest for the life with Penny kills almost a lot of these people.

On-island, everyone’s crying over Jin and Sun and, for the millionth time, struggling with they’re responsible for an island death. Jacob ultimately coordinates a pow-wow in which he tells them that he’s been protecting the island and now one of them has to do it. There’s a light that never goes out, and the keeper has to guard it. It’s past the bamboo field Jack landed in in the first episode. Notice how this sacred spot is completely unrelated to every sacred spot the show has had thus far: the cave, the hatch, the donkey wheel. Seriously? You’re introducing a new thing right now?

Meanwhile, Not-Locke and Ben kill Widmore, who’s just told them that Desmond’s really important because he’s a fail-safe in case the Jacob crew fails. Now he wants to get Desmond to destroy the island. That’s where it ends.

So yeah, that’s why this show annoys me. There’s no internal coherence. In the beginning, it was such a good show, and it’s devolved into such cliches. We’ll see if the finale can rescue itself.