ChatRoulette: Night with the Voyeurs. 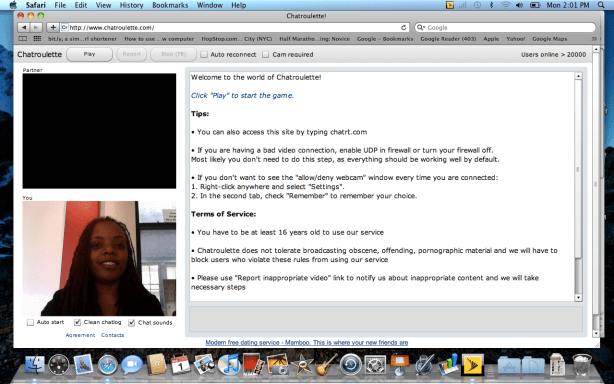 It’s a Friday night. I’m sitting on my couch. I’ve picked out a PG13 pajama tank top to wear. I’m hoping to discourage the type of sexual advances I’ve heard of from this site; however, I’m well aware that it’s in vain. The tank top has got thick white granny straps and my camera is angled so that it doesn’t dip below my collarbone.

I’ve been “Nexted” about 10 times before someone will talk to me.

As I expected, someone has called me nigger. Next. There’s a picture of a sticky post with the word “Pervert” written on it. Next. There are three giggling blondes in what looks like a dorm room. The webcam they’re using is aimed at their breasts. Tonight they plan on making a cyber fantasy come true. Next. “Are you a Sixer’s fan, or a Lakers’ fan?” They ask. The kids look like they’re of Asian descent. Their bedroom is brightly lit. Two girls lounge on a bed. A younger-looking boy who I presume to be someone’s brother is sitting in front of the webcam with a Lakers hat on. (Neither of those teams mean much to me personally.) For kicks, I type “76ers.” They’ve come completely undone by my audacity. “Fuck you Bitch!” Next.

A man picks up his cat and shakes it vigorously into the camera. “Reuben says hi,” he says. Next. Two girls next me instantly. A few times, the webcam doesn’t register a picture before the “Stranger” has moved on.

For the most part, this is how you play Chatroulette a new video chat site. There’s a chat screen that says “You” and “Stranger.” To the left are two video spots. “You” appear on the bottom and the “Stranger” on top. In addition there’s a sound option. If your stranger is unappealing to you, no need for decorum, you’re freed from perfunctory conversation, just hit “Next.” The site was created by a 17-year-old named Andrey Ternovskiy from Russia. Like Facebook and Twitter, the approach is simplistic and straightforward. To begin, click “Play.” As a player you give Chatroulette access to your webcam. The site tells you it’s “Looking for a stranger.”

And strangers you will find.

I’ve been on the site for about 20 minutes before I get my first masturbator. He’s lying on his side, typing with one hand. The camera is facing his crotch. “Kinda hard to type with one hand,” I say. Next. There’s a girl with a University of M sweat shirt on. I can’t tell if it’s Massachusetts or Michigan. She’s so appalled by me she makes the face of a child being forced to eat her vegetables. Next.

Chatroulette can be a challenge to those with low self-esteem.

Most of these interactions last about 10 seconds. My first semi-normal interaction, and I mean someone I wouldn’t be appalled to speak with in close quarters, happens with a 19-year-old student in Chile. He’s studying sound engineering. We chat slowly because his English isn’t very good. I start using Google’ s translation tool to accompany my very basic Spanish. He’s more patient then most. A web Casanova who wants to trick me into regular conversation. He’s good looking too. But it doesn’t take me long to decipher what he wants. I’ve learned that people looking for cyber sex aren’t the really patient types.

Stranger: quieres jugar conmigo por webcam (do you want to play with me by webcam?)
You: no no quiero (no, no I don’t)

There’s also a guy from Italy. I tell him that I’ve been to Venice. Our conversation is pleasant, quick and amicable. There’s a guy from Canada. He’s a hockey player. He heard about Chatroulette over the radio and wanted to see what it was like. He had to get through twelve naked men to get to me. For him, I seem like a relief. Our conversation is like a business meeting over lunch. We hit all the basics: school, profession, location. We’re in and out.

30 minutes and a bunch of nexting later:

You: hi
Stranger: hey you are cute
You: thanks
You: how are you?
Stranger: get naked
You: not never
Stranger: i could do better

There’s another penis. This one involves a good clean shot of rubbing in tight blue briefs. The camera is so close I can see that he’s got blonde hair. He’s shaved. Prepared for this. Put some thought into the presentation.

Assimilation is starting to set in. I’m beginning to conform to the worst of my cyber-environment. “I’ve seen bigger!” I type. Next. I feel victorious, then kind of dumb. My patience for this game is wearing thin.

But then I meet this guy from Poland. We talk for about 35 minutes. He’s watching the hockey game between Canada and the US. He appears surprised that I’m not watching it as well. He’s also 19. Chatroulette’s usage demographic is mostly 18-24, white and male.

It’s 4:30am in Poland. He has some type of graphic covering his face. Once he deciphers my level of normalcy he removes it. I correct his English while we talk. “Thank you very much i need it becouse in this free summer time i want to go for job to the Ireland,” he says. My Polish friend doesn’t like Italians. “Why?” I ask. “i think they are boring becouse they eat only pasta and pizza,” he says. He’s really into emoticons and uses them constantly.

Talk of Italy and Ireland remind me of how close the European borders are. A three-hour trip in New York just takes me to more of New York. In Europe a three-hour trip can mean an entirely new country, culture and language. I’m reminded of one summer I spent in Europe on a bike tour. Traveling along the Rhine, I had breakfast in Switzerland, lunch in Lichtenstein and dinner in Germany.

We talk a little more. He wants to know where I’m from. He tells me I look like Niobe from The Matrix. He couldn’t be more wrong, but I appreciate the sentiment.

There’s been an influx of Nigerian immigrants into Ireland in recent years and a lot of anti-immigration sentiment because of it; I think this is what’s informed his opinions.

Camera’s do weird things to you. I’m staring at myself, staring at a screen, staring at myself looking back at someone who is doing the same. I’ve learned that when I’m chatting sans video, I repeat what I’ve typed aloud. That’s very weird when there’s a camera locked on you. Think small stretches of silence are weird over the phone, add live footage and it’s an uncomfortable view of seat shifting, stolen glances, or full out staring. Once a conversation loses gusto there’s a whole lot of awkward smiles before someone musters up the courage to politely say good night and quickly, or abruptly “Next.”

All in all the night felt like I’d attended an International house party in my pajamas. It was kind of fun. Like Technotica says, “that some choose to use it as a low-fi version of “The Circuit” — the instant sex partner search in the movie “Logan’s Run” — just means this is the Internet.” It’s not so different from a night out in New York sans the parade of penises of course (sometimes).

I’ve been accosted with unwelcome sexual advances, sized up as unattractive or boring, and virtually, I’ve traveled to four different countries. So far the game has already spawned what Advertising Age calls an “ecosystem,” an imitation, as well as a bit of controversy about what’s appropriate for web streaming and a few urban legends. (“Did you hear the story about the guy who….”)

Play at your own risk.