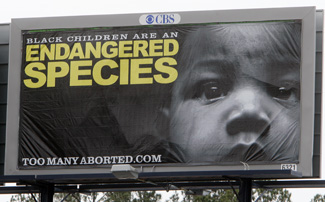 I’ve a piece up at The American Prospect exploring how anti-choicers use fear of the “abortion industry,” genocide, and race-based coercion to … coerce black women into not having abortions:

In Atlanta, Georgia, a billboard campaign that started this month proclaims that “black children are an endangered species.” On the campaign’s Web site, TooManyAborted.com, the Radiance Foundation alludes to Planned Parenthood founder Margaret Sanger’s support of eugenics and cites the disproportionately high number of unintended pregnancies and abortions among black women. The campaign is part of a new push by anti-choice advocates to exploit unequal access for reproductive-health services and black-genocide conspiracy theories (including the problematic history of Sanger) to further their agenda. As a quote displayed prominently on another anti-choice Web site, BlackGenocide.org, reads, “The most dangerous place for an African American to be is in the womb of their African American mother.”

Poor women have four times as many unintended pregnancies as women who live above the federal poverty line. Among black women — who are more than twice as likely to be poor than white women — the numbers are even more dramatic. Sixty-nine percent of their pregnancies are unintended, and they have 37 percent of all abortions, a number wildly disproportionate to their representation in the population.

Black women may be having more abortions, but that doesn’t prove that they’re being coerced into having them. The only thing it proves is that black women are disproportionately having pregnancies they didn’t intend. According to the Guttmacher Institute, the top two reasons all women give for having abortions are that they don’t have the support of a partner and that they cannot afford to have a child. There’s no reason to believe that black women have abortions with a different motivation.

UPDATE. A statistical analysis of the genocide claims from a friend of a friend of the blog, Carl, here:

Now, if you’ve given birth to 3 children, you are already reproducing above the replacement rate of 2.1 children per couple. I’d think that the mark of any well executed genocidal campaign would be that the population in question would be shrinking. But blacks have higher birth and fertility rates than whites and the black population is projected to grow over the next century, both in absolute terms and as a percentage of the American population.

If the masterminds behind the black genocide are real, I think we can at least conclude that they are incompetent.