Home » Browse PostBourgie » Now This? This Is a Story.

Now This? This Is a Story. 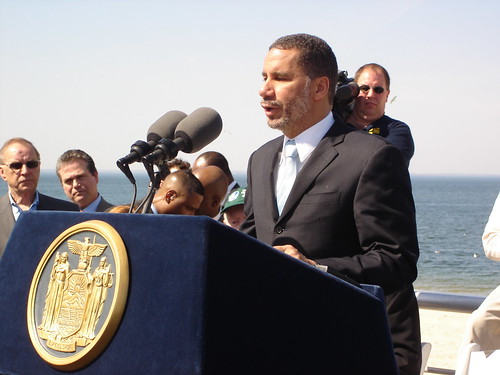 A lot of people were disappointed by the NYT‘s anticlimactic story on David Paterson that followed lots of speculation about a bombshell the paper was working on. (Many said the story would force Paterson to resign.)  The story that ran focused on the checkered past of a close aide, David Johnson, who was arrested on drug charges as a teenager and who had been in several altercations with women. (Paterson defended Johnson after the story ran, saying the arrests had happened a long time ago, and that Johnson, 37, deserved a second chance.)

But the story that the Times just put out a few moments ago goes a bit further, implicating the governor’s administration in intimidating a woman who was attempting to press charges against Johnson for assaulting her:

Last fall, a woman went to court in the Bronx to testify that she had been violently assaulted by a top aide to Gov. David A. Paterson, and to seek a protective order against the man.

In the ensuing months, she returned to court twice to press her case, complaining that the State Police had been harassing her to drop it. The State Police, which had no jurisdiction in the matter, confirmed that the woman was visited by a member of the governor’s personal security detail.

Then early this month, days before she was due to return to court to seek a final protective order, the woman got a phone call from the governor, according to her lawyer. She failed to appear for her next hearing on Feb. 8, and as a result her case was dismissed.

Many details of the governor’s role in this episode are unclear, but the accounts presented in court and police records and interviews with the woman’s lawyer and others portray a brutal encounter, a frightened woman and an effort to make a potential political embarrassment go away.

The case involved David W. Johnson, 37, who had risen from working as Mr. Paterson’s driver and scheduler to serving in the most senior ranks of the administration, but who also had a history of altercations with women.

On Wednesday night, in response to inquiries from The New York Times, a senior administration official said Mr. Paterson would request that Attorney General Andrew M. Cuomo investigate his administration’s handling of the matter. The official also said the governor would suspend Mr. Johnson without pay. He declined to answer any specific questions about the governor’s role in the matter.

The lawyer, Lawrence B. Saftler, said that the conversation lasted about a minute and that the governor asked how she was doing and if there was anything he could do for her. “If you need me,” he said, according to Mr. Saftler, “I’m here for you.”

Mr. Saftler said the governor never mentioned the court case, but he would not say if the call had influenced her decision not to return to court.

The call also came as The Times was examining the background of Mr. Johnson, whose increasing influence with the governor had disturbed some current and former senior aides to Mr. Paterson.

The woman’s lawyer asked that she not be identified by name because she feared retaliation, in part because she works at a public hospital.

The alleged assault happened shortly before 8 p.m. on Halloween in the apartment she shared with Mr. Johnson and her son for about four years, according to police records.

She told the police that Mr. Johnson had choked her, stripped her of much of her clothing, smashed her against a mirrored dresser and taken two telephones from her to prevent her from calling for help, according to police records.

The woman was twice granted a temporary order of protection against Mr. Johnson, according to records of the proceedings in Family Court in the Bronx.

“I’m scared he’s going to come back,” she said, according to the records, in which the court referee noted bruises on the woman’s arm.

“I’m glad you’re doing this,” the woman told the court referee overseeing the case, “because I thought it was going to be swept under the table because he’s like a government official, and I have problems even calling the police because the state troopers kept calling me and harassing me to drop the charges, and I wouldn’t.”

She added, “I’ve never been through this before.”

This is disgusting if true. It’s hard enough for victims of domestic violence to get help or justice when the governor of their state is not leaning on her to keep quiet.

And the political ramifications could be myriad. Paterson, already polling disastrously, has been defiant in his quest for election to the office he inherited in another governor’s scandal. He’s not likely to bow out now. But Andrew Cuomo, his likely opponent in the Democratic primary, is now handling the investigation of this case.