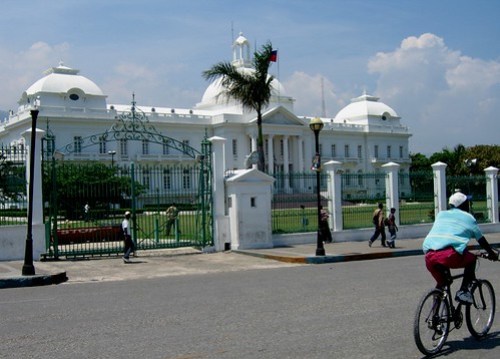 by M_Eriksson; used under a Creative Commons license.

The phone calls started early. The mass text messages. Do you know anybody there? Yes, so-and-so can’t find their father. Damn. Her? Her grandmother landed the day the earthquake hit. How is she? She says that she doesn’t feel like her grandmother is dead. Me? My mother’s cousins are missing. Sorry, I gotta go. I have to see if my grandmother is OK.

We check on our elders. Our connection to Haiti, the place, has always been through them. Through the nostalgia–family stories, old feuds, and first loves, the fierce pride of being the First Black Republic in the Western Hemisphere.  And what of it now? These days Haiti is commonly referred to as the Poorest Nation in the Western Hemisphere. I’ve heard people say that maybe Haiti would have been better off waiting. Maybe Haiti fought too soon for its independence.

Those are conspiracies. Fatalistic thoughts for people desperate to know how things could have gone so wrong. The overall consensus today, though, was, “Why Haiti?” and if Haiti then, “Why Port-au-Prince?” the capital. No, we don’t think people living in rural areas deserve disaster. But why the most heavily populated area? The place with the most infrastructure, in a country where infrastructure is wanting.

Most of my friends were born here, in the US. Growing up in Flatbush, Brooklyn my connection to Haiti has been through its Brooklyn Diaspora. My Haiti was the Catholic Church around the corner, where I had my first Communion. Some of the members there worshiped along side my grandmother, once a member of the Haitian aristocracy; they called her Madam. My Haiti is when my sister and I would go food shopping with my mother up and down Flatbush Avenue. Everybody was a cousin. In fact it’s hard for my mother to grasp what the term “second cousin” means. It was customary to kiss a relative on the cheek to say hello. They’d ask us about school–always school, while my mother ordered bouillion (only on Saturday mornings), or soup jouroumon (only on Sunday mornings), flaky warm patties stuffed with gobs of beef, chicken, or smoked herring, and akassan, a sweet corn-milk drink.

Over summers we got our fruit from dark-skinned men with brightly colored shirts and hands ashen from heavy lifting of sugar cane and fruit–mangoes, pineapples, coconuts and watermelons. They did this out of the back of a van, beaten by Flatbush potholes, and in between shilling produce, some of them drove shoppers to and from Kings Plaza, the area mall and hang out, for a dollar. They drove wildly past buses and weaved in and out of traffic like rats mining through tunnels, angering the MTA and whoever was elected mayor.

There were also the stereotypes. Haiti, a poor, violent, place. They way I heard it, if you were comin’ up Haitian in Brooklyn in the early nineties, you didn’t tell a lot of people where you were from. By the time I had come of age, the Fugees had made it more acceptable to big up Haiti. But before then, girls like my sister were pushed down stairs. Boys with the “just off the boat uniform,” penny loafers and jeans, were jumped on their way home from wherever. So we all adopted the worse of the stereotypes, the most violent of our history. Everybody knew Papa Doc, Françios Duvalier, the vicious dictator who ruled from 1957 – 1971 declaring himself “President for Life.” We all had family members in the TonTon Macoutes. And Vodou? Well, never leave a strand of hair at a Haitian person’s house. And mess with me, I’ll get my uncle to turn you into a zombie.

We grew out of that. Besides we’ve got Edwidge now and Wyclef is still makin’ music. Sak pase? N’ap boule! Kreyole for “what’s up” and literally “i’m hot” have become terms of endearments for any person who has grown up in, or a near a predominantly Haitian community. And in 2004 at the West Indian Day Parade in NY, which takes over Eastern Parkway, there were hundreds of us waving our flags with pride. We were celebrating our bicentennial and dancing to Kompa behind ostentatious floats. That year we took over the parkway.

These are my memories. My connection to a place I’ve visited only once. I was on a cruise with my family. The cruise line would not refer to the island we were visiting as Haiti. At the time they called it Hispanola. I didn’t feel at home there. There was no natural pull for me, No feeling for it. But as I watched my mother pacing back and forth, using this time of disaster to reconnect with the family she could find, every phone call, every text message felt like a legacy lost. Our history crumbling.