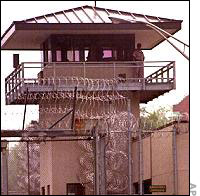 Adam Serwer writes that after decades of taking increasingly punitive steps against nonviolent felons, many of the folks who championed so many of those same tough-on-crime policies — which has left 1 percent of the U.S. population behind bars — are starting to change their tunes.

Fueled by the damage mass incarceration has done to state budgets, a new “smart on crime” movement has emerged to seek new ways of reducing the number of people in the system. Many states, including New Jersey, have attempted to do so by reforming probation and parole, in part by using something called “graduated sanctions” — levying small punishments on those who violate the terms of their supervision. Instead of being thrown back in jail, parolees are confined in short-term residential assessment centers — privately run institutions where they are evaluated. The parole board, based on recommendations from the parole officer, then decides the best course of action: revoking parole, placing the offender in a work or treatment program, or putting him on position-monitoring (using the ankle bracelet), which is one of the harsher sanctions in New Jersey.

It’s important to understand that most people who violate parole aren’t committing crimes. In New Jersey, a full 81 percent of parolees who return to prison are doing so because of technical violations — two of the most frequent are failing to report as instructed and failing to obtain approval for a change of address. To throw someone back in jail for two years because of a technical violation seems unfair even to probation officers, many of whom are relieved to have more choices. “It gives you other options instead of just locking them up,” says Sgt. Albert Kozak, a New Jersey parole officer. “Instead you put them in a place like [residential assessment center] Logan Hall, and they learn their lesson.”

America is slowly inching away from decades of a draconian approach to criminal justice — one that has resulted in the “land of the free” imprisoning more of its citizens than any another country in the world. In Congress, bills to repeal the sentencing disparity between crack and powder cocaine are gathering momentum. The new head of the Office of National Drug Control Policy, Gil Kerlikowske, has abandoned the “drug war” rhetoric. Religious conservatives commiserate with bleeding-heart liberals over what to do about recidivism. In states like New Jersey, officials are thinking of creative ways to curb offending behavior without relying solely on incarceration. Although ideas like graduated sanctions have been around for years, they are now being implemented in earnest as states seek new strategies for deterring crime rather than simply punishing it.

This system, while politically popular, has become more and more untenable. The cash-strapped state of California has been struggling to pay for its huge prison system, which ballooned under its “three strikes” policy.  Last year, federal judges there  determined that its prison facilities were so overcrowded that they violated inmates’ constitutional rights and ordered a drastic reduction of the inmate population.

There are huge consequences for the communities from which these inmates hail. Mass incarceration creates an entire class of people who are effectively unemployable. And of course, if getting locked up is such a routine, unremarkable occurrence in a neighborhood that a person has a support network inside prison as well, any deterrent effect the threat of incarceration may have. Jennifer Gonnerman‘s 2005 book,  Life on the Outside, tragically underlines this last point. Elaine Bartlett was sentenced to 20 to life years in a maximum-security prison for selling four ounces of cocaine — her first arrest of any kind, but aggressively prosecuted under the state’s infamous Rockefeller drug laws. Her young children would drive upstate each month to visit her, and they would be patted down, searched, and chaperoned by armed guards as they made their way to meet her. Her son would himself be arrested and incarcerated years later, a fate certainly aided by the mundanity of his experiences with institutionalization.