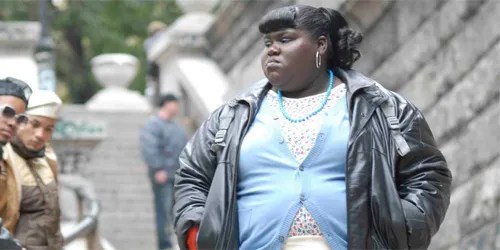 Since seeing Precious on Friday, I’ve been trying to recall another recent onscreen portrayal of evil anywhere as effective as the one offered up by Mo’Nique in the role of the title character’s mother. Javier Bardem’s unrelenting assassin in “No Country for Old Men” might qualify, but he was essentially a cartoon. Maybe Daniel Day-Lewis’s oil tycoon in “There Will Be Blood,” but even that sociopath seemed to have other drives (like towering greed) besides perpetuating human suffering. Not so Mo’Nique’s Mary, an absolute monster who is devoid of any redeeming qualities. She commits an atrocity in every scene she inhabits, and so the tiny, dim apartment she shares with Precious isn’t just suffocating, but terrifying. It’s the most powerful performance in a movie full of them.

But the movie’s uniformly excellent acting underscores the other problems with Lee Daniels’ direction. To be fair, it would be hard to pull off subtlety in a movie in which the morbidly obese, illiterate protagonist is routinely sexually and physically abused, impregnated by her father, and ignored by anyone else she comes across. But given all that, there’s certainly no need to pile on, which is what Daniels does, intersplicing bright, tonally dissonant fantasy sequences into the main character’s more traumatic moments. As her father rapes her, she transports into a  daydream in which she’s a beloved celebrity; when she’s attacked by some dudes on the street, she entertains thoughts of dancing flirtily with some guy on the set of a music video. We get it: she wants to be anywhere but where she is in those moments. But when we’re talking about a character for whom personal degradation is a daily occurrence, it seems like that sentiment wouldn’t need any additional highlighting. Like the scene where Precious is getting ready for school and sees a blonde white girl aping her movements in the mirror, these flourishes are way, way too on the nose.*

But what I found most implausible was Precious’s inevitable awakening and empowerment. (Inevitable because this is a Hollywood movie, after all.)   Now, obviously, we want Precious to find a place to belong and to feel safe, but the movie’s approach to granting this to her is unbelievably cheap and easy. Her teacher, Blu Rain (Paula Patton), happens to be superhumanly beautiful and munificent, and reaches Precious through the power of the written word (because no troubled teenager in a Hollywood movie can ever saved by math or science). I could buy that a neglected kid like Precious would be longing for human connection. What’s tougher to swallow is that this battered teenager would have sufficient cause to trust this lady or buy what she’s selling with so little resistance, and that she’d become so socially well-adjusted with her peers so quickly. Maybe Blu Rain is made of magic (which would at least explain the name). The scene in which Precious tearfully confesses to her classmates that she’s HIV-positive is, of course, expertly acted. But as my co-blogger quadmoniker pointed out when the film ended, it was also Nice White Lady more or less verbatim.*

(There are some other grating little period details. For some reason, Daniels decided to set the movie in 1987, even though nothing about the movie seems like 1987 save some wardrobe choices here and there. In a moment that is supposed to symbolize Precious’s budding awareness as she becomes more literate, we see a montage of important people and events about which she wants to expose her child, including Tianenmen Square, which wouldn’t happen for another two years. In another of those aforementioned fantasy montage things, the background music is Queen Latifah’s “Come Into My House,” which, again, wouldn’t come out until 1989. Then there’s the modern NYC subway car we see Precious on. Nitpicky, perhaps, but then there’s nothing about the story that required Daniels to set the movie in 1987, either. Maybe that chronological conceit was a way to explain all the crackheads in her neighborhood, or Precious’s affinity for light-skinned brothers, who haven’t really been in since the days of DeBarge and Al B. Sure.)

Many of my deeper qualms with the movie echo Stacia’s feelings about Push, the novel by Sapphire on which it’s based. “What possible reason would Hollywood have for further dramatizing an existence as heinous as Precious’s?” Does the film shed light on some hard truths about urban poverty or sexual abuse? Or is Precious a parade of exploitation masquerading as topicality? Good luck trying to satisfactorily answer any of those questions.

*My co-blogger Isabelle, who was one of the people with whom I saw the movie, said that this Daniels outing was relatively restrained compared to other movies he’s helmed, like Shadowboxer.