Book of the month: Quicksand by Nella Larsen. 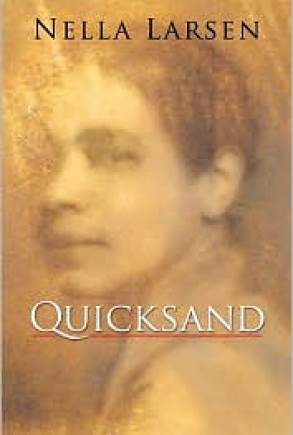 Referred to as a “tragic mulatto tale,” an accurate description, yet one that has never interested me, Quicksand by Nella Larsen is about the most frustrating black female lead I’ve ever read–Helga Crane. She’s a woman whose eccentricities today, I imagine, would be imitated and fawned over. Her described beauty would be put on magazine covers and her style called things like “classic” and “funky,” “retro” and “vintage.”

But really Quicksand is about female sexuality and identity, and the desire to express those things without compunction. It’s also about passion and security, and pitting those two elements against each other, as literature often does, as if they can’t naturally exist together. Can they?

In the introduction to the American Women Writers edition which pairs Larsen’s two novels Quicksand and Passing, editor Deborah E. McDowell remarks on the push and pull between identity and sexuality indicated by the protagonist’s fate and Larsen’s propensity towards ambiguous and unhappy endings. McDowell says: “these unearned and unsettling endings sacrifice strong and emerging independent female identities to the most acceptable demands of literary and social history.”

What are the acceptable demands? And who dictates them? And who loses? Does anyone?

These queries remain hotly debated today. Just this week, CBS premiered its new show, The Good Wife, which follows the life of a humiliated political wife—Clinton, Swinton, Edwards and Sanford. In Larsen’s work, we don’t get to see the aftermath and there’s certainly not the element of race, but aren’t we asking the same types of questions?

Larsen, who gained critical acclaim from her two novels, never recovered professionally from a plagiarism scandal. She died in obscurity in Brooklyn.

We will be discussing the book on October 15th.