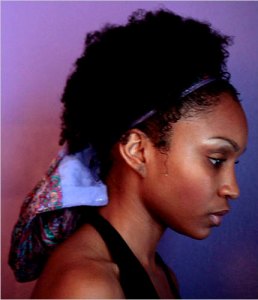 Slb’s analysis of the natural hair discussion being a “constantly warmed over narrative” might actually be on point. Chris Rock does a movie on black women’s hair, and suddenly we have to read about the politics of it in the New York Times:

Although legions of black women in America straighten their hair (including Michelle Obama), hair salons specializing in natural styles have proliferated, and more black women are working with their virgin hair. Many wear their twists, locks or teenie-weenie Afros (known as TWAs) with an attitude — proud to have not given in to the pressure to straighten hair. In “Good Hair,” Nia Long, the actress, describes the conventional wisdom that straightened hair is more desirable: “There’s always a sort of pressure within the black community, like ‘Oh, if you have good hair, you’re prettier or better than the brown-skinned girl that wears an Afro or the dreads or the natural hairstyle.’ ”

For some, the battle lines are drawn.

But in recent interviews, a number of people of color expressed a weariness with the debate. They asked, essentially: Why can’t hair just be hair? Must an Afro peg a woman as the political heir to Angela Davis? Is a fashionista who replicates the first lady’s clean-cut bob really being untrue to herself?

While I am looking forward to the film, I find that stories like this (and I’ve seen more than a dozen in the last few years) leave me cold. They break no new ground. What I learned from this article is that some black women believe that they have to straighten their hair to be accepted in society.* Some wear their hair natural as a statement. Some think that hair is just hair. Some change their hair monthly.

All of this means just one thing: black women have differing opinions on the same subject. Hmm, I guess that is newsworthy.

The ending, which quotes Shayna Y. Rudd (pictured above), my classmate from HU and truly one of the loveliest women I’ve ever met, is a bit better. Shay, who was a contestant for Miss America, concludes that we should set our own standards. And she’s right. But author Catherine Saint Louis brought us to that conclusion in the most boring way possible.

Oh, and another thing. Waaaaay too many comments on that story were some variation of “well, I’m a white woman with really kinky curly hair and I’ve always hated it. I don’t mean to diminish how black women feel, but isn’t the problem that ALL women dislike their natural appearance?” No. No, that’s not the problem at all. The hatred of nappy hair doesn’t exist in a vacuum. (It’s a little over the top, but watch some of 400 Years Without a Comb and get back to me on that.)

*The article makes no mention of (often low-level) jobs that have regulations against locs or braids — two very popular options for black women who don’t straighten their hair.