People, 'Mad Men' Is Not Feminist. 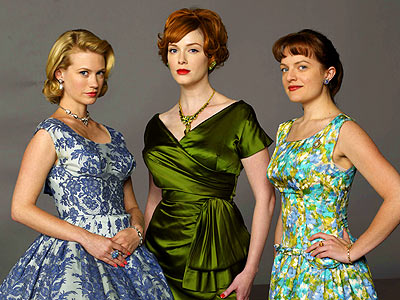 [from feministdonut, cross-posted from The Feminist Texican.]

Over the past month or so, I’ve been seeing all kinds of articles on what a feminist show this is.  Much as I lovelovelove the show (”Mad Men” and “Project Runway” are pretty much the only times I turn on the TV each week), every time I read one of these articles, I want to scream, “Stop projecting!“

[Possible spoilers after the jump.]

The arguments made for “Mad Men” being a feminist show:

The fact that it’s written by women, that it’s historically accurate, that the women are nuanced characters, and that the writers aren’t afraid to show the men being unabashed jerks still doesn’t justify categorizing the show under “feminist.” None of this means the show is in and of itself feminist.  It just means that the show is fertile ground for feminist/gender analysis.

“Mad Men” is feminist/gender analysis gold, that much is certain. However, when I read shit like Nussbaum’s rape article, I feel like banging my head against the desk a few times:

At once a real person and an iconographic cartoon, she was a retro Samantha Jones, a third-wave feminist before her time, eternally articulating one form of female power: the potent combination of an arched eyebrow and a tight green skirt.

The second wave exploded on the scene largely with the publication of The Feminine Mystique, which was first published in early 1963–the year in which this current season is set.  These women are who The Feminine Mystique is about; they experience The Problem That Has No Name on a daily basis.  We may very well start to see some the women setting the framework for a true feminist awakening on the show.  (Even then, I’d be hard pressed to consider the show itself feminist.)

Until then? Stop projecting.