Home » Browse PostBourgie » On Michelle Obama and Being 'Appropriate.'

On Michelle Obama and Being 'Appropriate.' 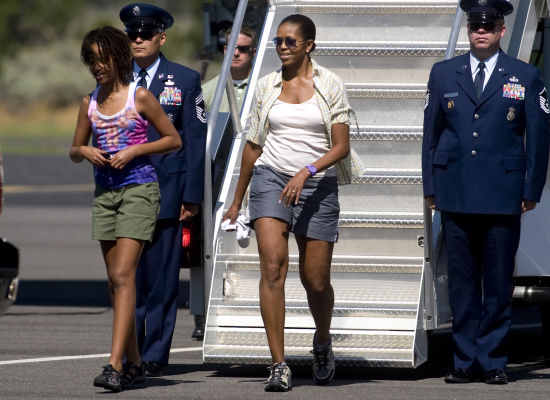 So, here’s the thing. When we were being subjected to the firestorm over Michelle’s “right to bare arms” (har har har) a few months ago, I had some conflicted feelings. I’m not a terribly conservative dresser, but I know I wouldn’t have worn a sleeveless dress to the not-State of the Union.

However. The uproar about Michelle’s arms smacked of body policing, albeit in the guise of “as first lady, is she representing the U.S. well?” See, I don’t think most people on the “no” side are there because they care about how she represents the U.S. The people who criticize the Obamas just for breathing are often the same people who are quick to claim that most Europeans “would be speaking German if it weren’t for us.” In other words, they don’t care about what other countries think of us because we’re teh awesome and everyone else can love us or leave us alone.

The people who are ‘concerned’ with the appropriateness of her attire seem to be trying to impose their own standard of What An Adult Woman Should Wear on a woman they don’t know. That bothers me.

Now, I could defend her decision to wear short-shorts by saying any of the following: she’s dressed like every American tourist ever, minus a fanny pack. She has great, muscular, long legs. And, for Christ’s sake, it’s a family vacation in Arizona in August.

But I don’t think it’s appropriate to defend her decisions, because in this case, I don’t think it’s appropriate to ask whether her decisions are, um, appropriate. As White House social secretary Desiree Rogers said back in February, if Michelle wants to wear something, that’s what she’s going wear. For me, that was the end of the “conversation.” I think that generally, she’s set a standard for herself — she dresses comfortably, often chicly, and tends to be more casual and/or daring than her predecessors.*

Michelle is one of the most famous women in the world, and part of a beautiful family that people like to look at. And I think it’s natural to discuss her appearance. (For the record: neither UniverseExpanding nor I much cared for her dog-walking madras shorts. But we both recognized that if you’re out walking your dog, then you should be able to wear whatever is comfortable for you.) But something about the question “is X appropriate?” really strikes me as rude.

She’s not some teenager or twenty-something (like me) still figuring out her personal style, or navigating the waters of “is this okay to wear?” She’s not a starlet who earns her bread and butter from red carpet appearances. She’s a lawyer who has worked in corporate America; she spent years in the casual halls of upper-echelon universities; she has been a politician’s wife for some time, and now she lives an active life while keeping up with two young daughters. She’s got this.

*G.D. reminded me that HRC was pilloried for her appearance when she was FL. I have vague memories of jokes about her clothes and hair, but I don’t remember it being so pervasive as it is today. Of course, our collective celebrity obsession is a little different now.