Beefing Over the Public Option. 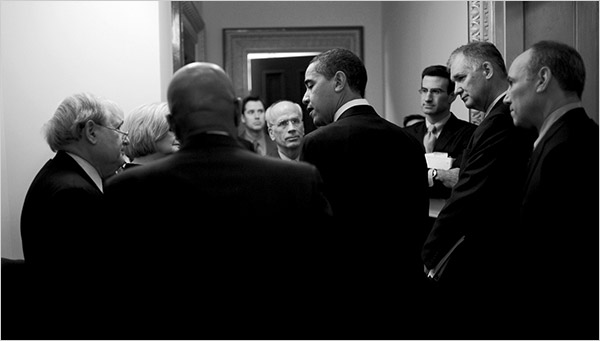 So I just got done having a spirited argument with Latoya over the White House’s pussyfooting around on the public option. (Gibbs downplayed Sebelius’s statement from the day before and said that the administration’s orientation toward the government option hasn’t changed.) Latoya thinks that Obama needs to start pulling rank and cracking heads in the Senate — a “no-bitchassness mandate,” in her words  — to make sure any reform passed includes the public option. Full stop.

I share her frustration and think the public option is the ideal way to go, but it doesn’t have the votes. (The public option is being held up, in large measure, by senators from states with populations smaller than Brooklyn’s.) Open Left says there are 43 Senators who have stated they were on-board. Again, not far from 50. But a lot of the Democrats standing in the way are conservatives like Blanche Lincoln and Kent Conrad, who come from very red states and are facing re-election next year.

I’d be willing to part with the public option  — for now — if we could get strong, passable legislation that included:

I’m missing some stuff, but this seems like a fairly good skeleton that we can add more meat onto later — and I think that a public option will have to be part of that (the government option will  push premiums down for everyone way  more quickly than any of these things). Getting the aforementioned stuff passed will be difficult but is very doable, and would still qualify as a major accomplishment both in human and political terms.  (I keep telling myself that the dawdling on DADT/DOMA is designed not to fan any culture war flames while trying to get this done, and it’s proving to be hard enough without those things as major distractions.) I suspect that getting this done would mollify his liberal flank on this issue, for awhile at least.

UPDATE: Latoya talks to Angie Drobnic Holan of Politifact to get some answers about the nuts and bolts of the three bills.