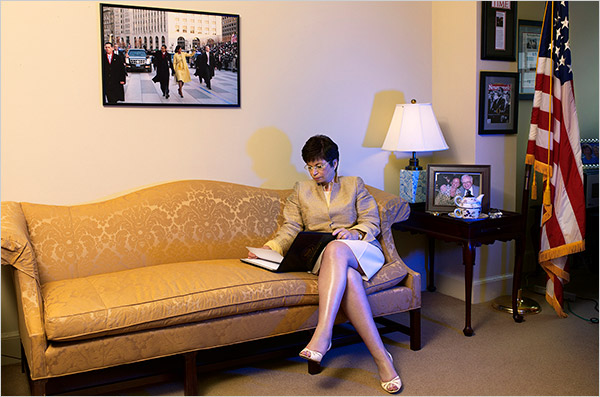 The Times has a long, long profile on Valerie Jarrett, one of Obama’s closest advisors during the campaign and who currently serves as a senior advisor in the White House. It begins thus:

On Jan. 25, 2008, the day before the South Carolina Democratic primary, Barack Obama endured a grueling succession of campaign events across the state. When his staff informed him that the evening would conclude with a brief show-up at the Pink Ice Ball, a gala for the African-American sorority Alpha Kappa Alpha, Obama flatly refused to attend. “I’ve been to sorority events before,” he said. “We’re not gonna change anybody’s mind.”

Rick Wade, a senior adviser, Stacey Brayboy, the state campaign manager, and Anton Gunn, the state political director, took turns beseeching their boss. The gala, they told Obama, would be attended by more than 2,000 college-educated African-American women, a constituent group that was originally skeptical of the candidate’s “blackness” and that the campaign worked tirelessly to wrest from Hillary Clinton. State luminaries like Representative James Clyburn — himself an undeclared black voter — would be expecting him. They would be in and out in five minutes.

The three staff members knew what their only option was at this point. “If you want him to do something,” Gunn would later tell me, “there are two people he’s not going to say no to: Valerie Jarrett and Michelle Obama.”

At the day’s penultimate event, a rally in Columbia, Gunn, Brayboy and Wade pleaded their case to Jarrett, the Obamas’ longtime friend and consigliere. When they were finished, Jarrett told them, “We can make that happen,” as Gunn would recall it. Jarrett informed Michelle of the situation, and when the candidate stepped offstage from the rally, Obama’s wife told him he had one last stop to make before they called it a night.

“I told Anton I’m not going to any Pink Ice Ball!” Obama barked.

Then Jarrett glided over to the fuming candidate. Her voice was very quiet and very direct.

Scowling, Obama affirmed that he did.

Jarrett is a fascinating woman, and her relationship with the first family, as both BFF and senior adviser is intriguing. The piece delves into the pains she took to define her role in the White House, since, as a close friend of both the President and First Lady, she was in uncharted territory.  The story goes on:

Jarrett also serves as the White House’s unofficial champion of minority issues. This may seem superfluous, given that a black man inhabits the Oval Office — until it’s noted that Obama’s inner circle consists largely of white males, same as it ever was. As a top adviser acknowledged, “At the end of the day, when he’s with his closest staff, she’s the only one who has a sense of what it’s like to have a different background from everyone else.”

*Okay, so it probably took more than a few thousand AKAs to win SC, but I know we helped!