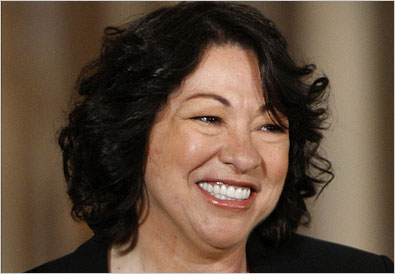 I tried my best to avoid the hearings for Judge Sonia Sotomayor. It’s honestly hard to tell what the Senators really think because they’re so busy show-boating, and the only thing you’ll learn about Sotomayor is that she, like others before her, has the innate or practiced ability to be as bland as possible in the face of inanity.

These hearings had added annoyances, of course. But I will say this, Jim Geraghty, a contributing editor for the National Review, made a pretty fair point on The Brian Lehrer Show yesterday. I had assumed Republicans were harping on the so-called “wise Latina” speech and the policy-making statements because they had nothing else: her record shows a mainstream jurist who is smarter than most of the senators interviewing her. But Geraghty’s point was that you can’t really look at her case history, because judges on lower federal courts are enormously bound by precedent. The only court that can set a new precedent is the Supreme Court. So you can’t really know what a judge will do until they’re a justice. And you kind of can’t blame them for being careful. They’ve been screwed before.

Geraghty also made the point that Sotomayor’s rhetorical flourish defense is a little hard to swallow. Also fair. We all know she meant what she said. Most would, I hope, see her statement as a simple, untroubling fact when taken in context. Others, well…I think we know what side of history they tend to fall on.